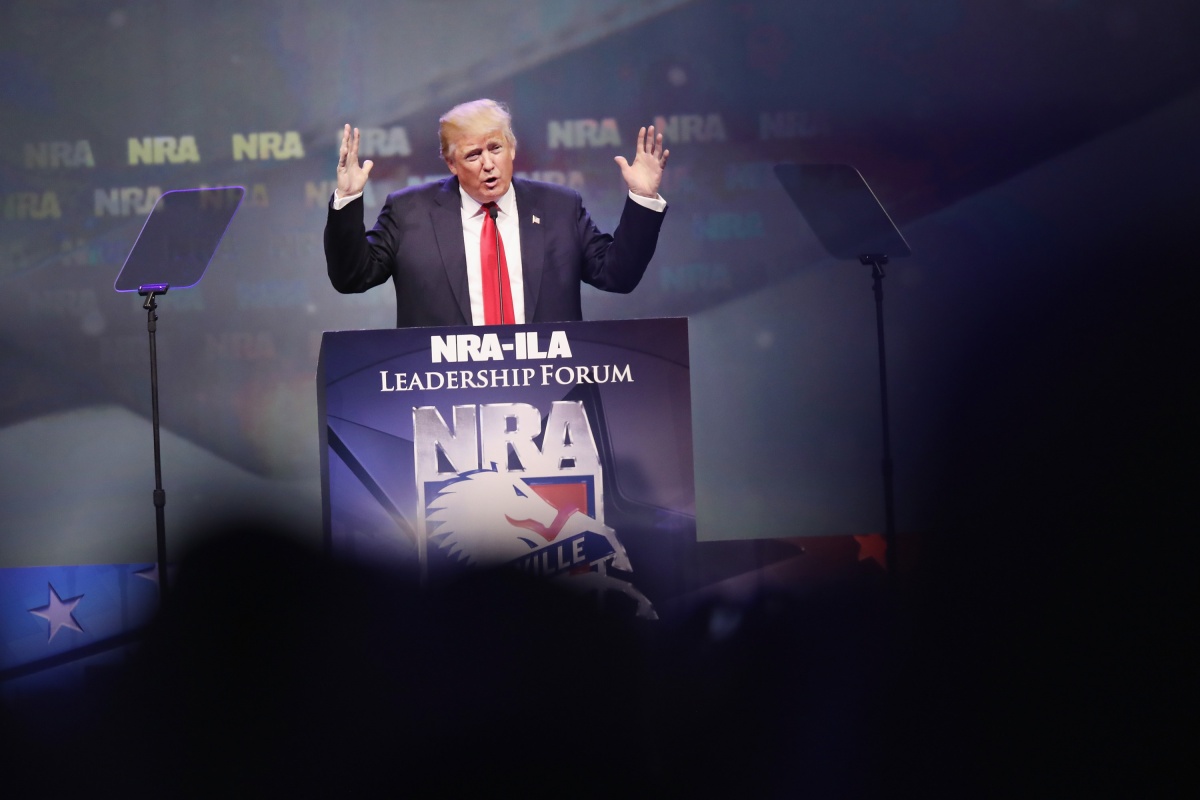 Ms Clinton, however, came out strongly in defence of her stance on gun control, tweeting that “America simply cannot accept 33,000 gun deaths in a year as ‘normal'”.

The Second Amendment establishes the constitutional right that Americans can own and carry guns.

“The Second Amendment is under a threat like never before,” Mr Trump said. “Crooked Hillary Clinton is the most anti-gun … candidate ever to run for office. And, as I said before, she wants to abolish the Second Amendment.

The controversial billionaire also supported the NRA’s wish to abolish gun-free zones in schools and military bases in the US.

In a Facebook post after the event he again attacked Mrs Clinton, this time for hypocrisy because “she is surrounded by bodyguards who are fully armed”.

“No more guns to protect Hillary!”, he wrote.

Mr Trump secured the Republican nomination in April, when his closest rival Ted Cruz conceded defeat. Mrs Clinton had not yet assured her spot as Democratic candidate against closest competitor Bernie Sanders.

“This is someone running to be president of the United States of America, a country facing a gun violence epidemic and he’s talking about more guns in our schools,” she said during a speech to a gathering of mothers who’d lost their children to gun crime.

“He’s talking about more hatred and division in our streets, even about more nuclear weapons in the world. That’s no way to keep us safe.

Mrs Clinton maintained the Second Amendment (the right to bear arms) could still be upheld whilst ending the nation’s “senseless gun violence”.

But Mr Trump had not always been willing to completely “protect America’s right to self-defence”.

Many gun control advocates and news organisations began to delve into Mr Trump’s more pro-gun control past, once news of the NRA endorsement broke.

In his 2000 book The America We Deserve he wrote: “I generally oppose gun control, but I support the ban on assault weapons and I also support a slightly longer waiting period to purchase a gun.”

In March 2016 he told a Republican debate he no longer supported the assault weapon ban.

Assault weapons were used in numerous American gun crimes in recent years, most infamously at Sandy Hook Elementary School and at a cinema in Aurora, Colorado.

According to ABC News in the US, staff at Mr Trump’s resorts and golf courses around America said guests were not allowed to carry guns around the premises.

Mr Trump has so far campaigned on the promises that if elected, he would reverse President Barack Obama’s moves to streamline the US’s background checking system, and eliminate gun free zones.