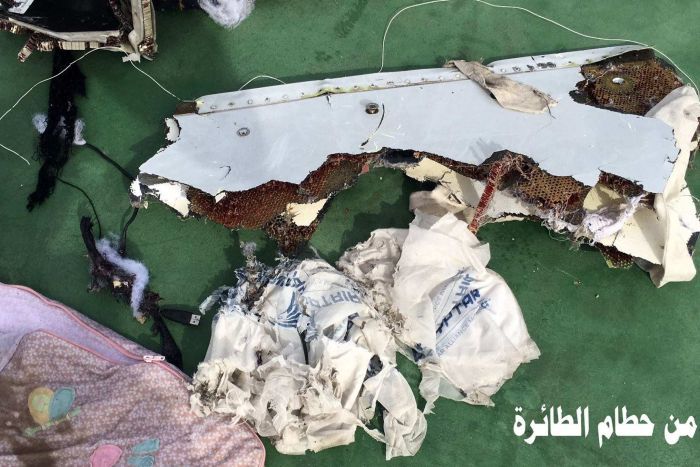 Mysterious details have emerged of disturbing graffiti scrawled on the bottom of the EgyptAir plane which crashed in the Mediterranean Sea with 66 people on board.

Security officials told The New York Times that Cairo aviation workers wrote “We will bring this plane down” on the underside of the aircraft about two years ago.

The details were revealed as the French aviation authority confirmed media reports of smoke being present in MS804’s cabin, before it disappeared en route from Paris to Egypt’s capital.

• Wreckage not from plane: authorities
• Victim had just become a father
• Aussie was on the EgyptAir plane

The Egyptian navy also confirmed that human remains, aircraft seats and passenger belongings from the plane had been found.

Separate graffiti on the plane depicted Egyptian President Abdel Fattah el-Sisi as a “traitor” and “murderer”.

The anonymous officials said the graffiti was linked to political turmoil in Egypt and not a militant threat.

Since former Egyptian President Mohamed Morsi was ousted by the military in 2013 and the crash of a Russian plane killing 224 in October 2015, EgyptAir had heightened its security and staff vetting procedures.

It was unclear how these measured fit in to the latest disaster, although authorities were sure that there was smoke in the cabin during MS804’s final moments.

“There were ACAR [Aircraft Communications Addressing and Reporting System] messages emitted by the plane, indicating that there was smoke in the cabin, shortly before data transmission broke off,” a spokesman of France’s Bureau of Investigations and Analysis (BEA) said.

The plane officially disappeared at 10:29am AEST on Thursday.

ACAR is a digital system that transmits short messages between aircraft and ground stations.

The spokesman said it was “far too soon to interpret and understand the cause of Thursday’s accident, as long as we have not found the wreckage or the flight data recorders”.

The signals indicated there was smoke in the front toilets near the cockpit, an expert told AFP.

On Friday (AEST) Egypt’s aviation minister said it was “more likely” a terrorist attack brought down the plane than a technical fault.

CNN and The Wall Street Journal quoted sources separate to BEA who said there was smoke in the cockpit.

The editor of Aviation Security International Magazine, Philip Baum, said the smoke indicated the plane was probably not hijacked.

But he said it was still possible there was a bomb on board or the smoke was caused by a technical fire.

French foreign minister Jean Marc Ayrault said that no theory for the crash could be ruled out.

The plane disappeared without any distress signal between the Greek island of Karpathos and the Egyptian coast.

The aircraft was carrying 56 passengers, including one child and two infants, and 10 crew, including three security guards, EgyptAir said.

One of them was dual British-Australian citizen Richard Osman, a 40-year-old geologist who had just celebrated the birth of his second daughter Olympe with his French-born wife Aureilie.