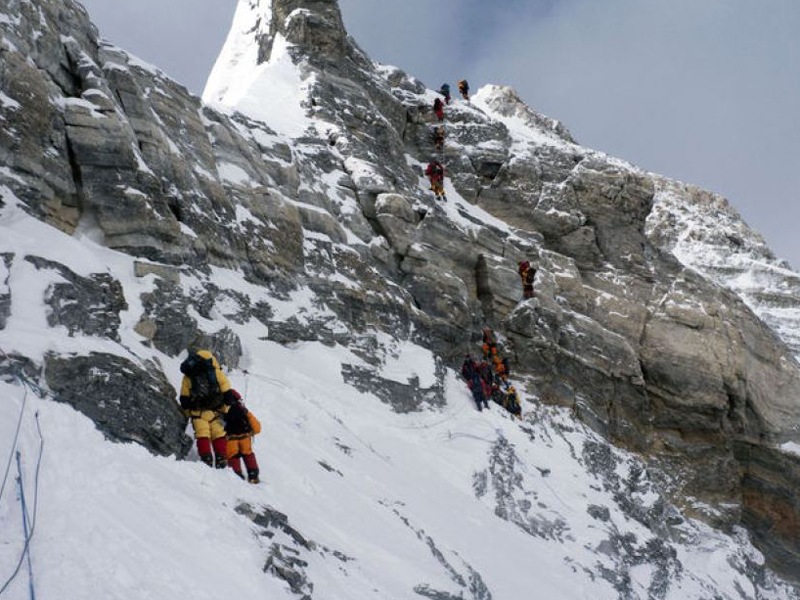 Melbourne university lecturer Maria Strydom is dead on Mount Everest and her family are angry they had to find out about her death through the media.

Dr Strydom, who also goes by Marisa, was on a seven-week expedition with her husband Robert Gropel – who has also been injured during the trek.

“We’ve never had official confirmation from the group organising the trek,” she said.

A single transmission from the tracker on Saturday gave them hope but a Google search on Saturday night delivered the devastating news that Dr Strydom had died, her sister Aletta Newman told AAP.

“Before I went to bed last night, I came across this article in the Himalayan Times naming my sister as having died on Everest and that is the absolute first I’d heard of it,” Ms Newman told AAP from Brisbane on Sunday.

Conflicting media reports attributing her death to altitude sickness, snow blindness and a stroke only added to the distress of the Strydom family, who have yet to hear from the company behind the expedition.

“We just don’t have answers and we’d really like to have some,” Ms Newman said.

The family is also worried about Maria’s husband Robert Gropel, a veterinarian who was with his wife on the expedition.

The Department of Foreign Affairs told Ms Newman only that Rob is injured and they are trying to get him down from the mountain.

Ms Newman said efforts were underway to recover her sister’s body but from an elevation of 8000 metres it would be difficult.

Dutch climber Eric Arnold, who was in the same climbing party, died of altitude sickness on Friday – both fatalities the first this year on the world’s highest peak.

Ms Newman said her sister and brother-in-law were experienced climbers and took extra oxygen bottles as a precaution.

Dr Strydom and Dr Gropel are vegans who were determined to climb the highest mountains on each continent.

“It seems that people have this warped idea of vegans being malnourished and weak,” Dr Strydom said in March.

“We want to prove that vegans can do anything and more.”

News of the deaths broke as confirmation came through that Queensland teenager Alyssa Azar had become the youngest Australian to conquer Everest on her third attempt.

Mountaineering expert Alan Arnette told AAP it was “very normal” for five to 10 people to die on Everest each year and altitude sickness was quite common.

He said altitude sickness was a broad term for a number of problems, including fluid in the lungs and brain swelling.

Monash University said in a statement it was “deeply saddened by the tragic news” of Dr Strydom’s death and extended heartfelt thoughts and support to her family, friends, colleagues and students.

Everest expeditions in 2014 were cancelled after 16 sherpas died in an icefall avalanche.

Trips were cancelled again in 2015 when Nepal’s 7.8-magnitude quake triggered an avalanche that killed 22 mountaineers at Everest Base Camp.