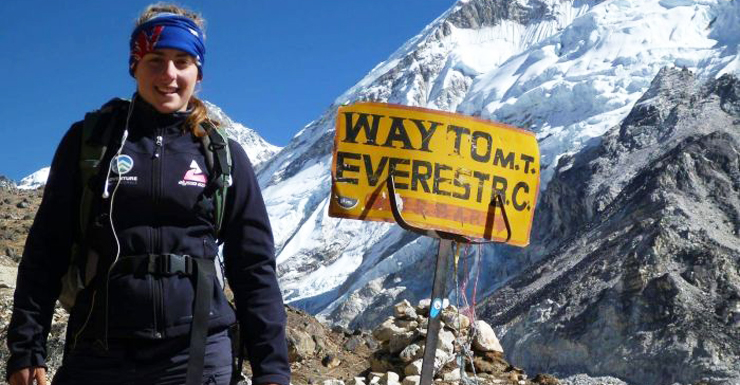 Queensland teenager Alyssa Azar has become the youngest Australian to reach the peak of Mount Everest, in a case of third time lucky.

Her supporters say the 19-year-old left camp about 4am (local time) for the final climb of about 800 metres to the summit of the world’s tallest mountain.

The young adventurer’s father, Glenn Azar, who is currently walking the Kokoda Track in Papua New Guinea, confirmed that his daughter completed her goal.

It was the Toowoomba teen’s third attempt to reach the summit after natural disasters thwarted two previous attempts.

In 2014, while she was at base camp an avalanche struck the Khumbu Icefall, killing 16 Sherpas.

In April 2015, she was again at base camp when Nepal was struck by a devastating earthquake, killing 3,218 people.

It has taken three years of training for her to reach the peak and collect the record.

Chase Tucker has trained Ms Azar for the past 10 weeks, saying she went hard and at times he had to tell her to ease up.

Mr Tucker said it is not so much the intensity of training, but consistency, modulation and practice in the Himalayans that was important.

“A lot of those traits that you see guys who have been climbing their whole life have, I can see in Alyssa,” he said.

“Incredibly stern, just focused on that one goal, like nothing I’ve ever seen before.

“To follow through with it, and stick to it as long as she has is astounding really.”

She began trekking in 2005 crossing the Kokoda Track in Papua New Guinea and Australia’s 10 highest peaks.

No stranger to success, nor record breaking, Ms Azar was eight years old when she became the youngest person to cross the Kokoda Track.

The youngest Australian person to reach the 8,847-metre summit was Rex Pemberton, who did it in 2005, aged 21.