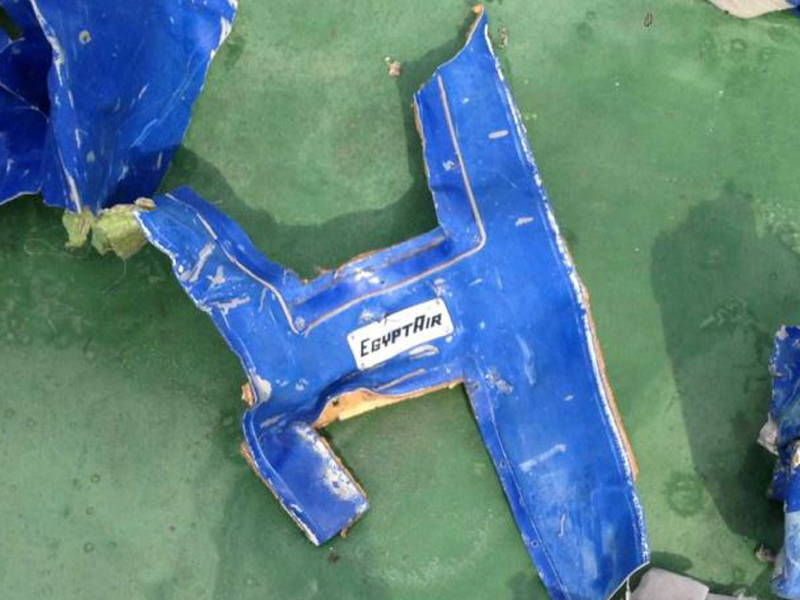 In an eerie coincidence, graffiti promising “We will bring this plane down” had been scrawled underneath the EgyptAir jet that crashed en route from Paris to Cairo on Thursday morning.

The note is believed to have been written about two years ago by aviation workers at Cairo Airport who were sympathetic to the Muslim brotherhood, according to three Egyptian officials.

• Wreckage not from plane: authorities
• Victim had just become a father
• Aussie was on the Egyptair plane

Authorities insist the graffiti attack, which came two years ago, was not connected to a jihadi threat but rather to the nation’s unstable political situation at the time.

The graffiti story follows reports that there were warnings of smoke being detected on board shortly before the plane disappeared off radar screens.

A spokesman for France’s BEA air accident investigation agency on Saturday said the signals did not indicate what caused the smoke or fire on board the plane, which plunged into the sea with 66 people on board as it was heading from Paris to Cairo.

But they offered the first clues as to what unfolded in the moments before the crash.

One aviation source said that a fire on board would likely have generated multiple warning signals, while a sudden explosion may not have generated any – though officials stress that no scenario, including explosion, is being ruled out.

Egypt said its navy had found human remains, wreckage and the personal belongings of passengers floating in the Mediterranean about 290 km north of Alexandria.

The army published pictures on Saturday on its official Facebook page of the recovered items, which included blue and white debris with EgyptAir markings, seat fabric with designs in the airline’s colours, and a yellow lifejacket.

Analysis of the debris and recovery of the plane’s twin flight recorders are likely to be key to determining the cause of the crash – the third blow since October to Egypt’s travel industry, still reeling from political unrest following the 2011 uprising that ousted Hosni Mubarak.

A suspected Islamic State bombing brought down a Russian airliner after it took off from Sharm el-Sheikh airport in late October, killing all 224 people on board, and an EgyptAir plane was hijacked in March by a man wearing a fake suicide belt.

A message purporting to come from Islamic State urged attacks on the United States and Europe in the Islamic holy month of Ramadan beginning in early June.

“Ramadan, the month of conquest. Get prepared…so that you make it a month of calamity on the non-believers anywhere,” said the message posted on Twitter accounts that usually publish Islamic State statements.

It made no claim of responsibility for the EgyptAir crash.

The signals from the plane “do not allow in any way to say what may have caused smoke or fire on board the aircraft”, said a spokesman for the French BEA agency, which is assisting an official Egyptian investigation.

He added that the priority now was to find the two flight recorders, known as black boxes, containing cockpit voice recordings and data readings, from the Airbus A320 which vanished from radar early on Thursday.

Egyptian said it was too soon to reach any conclusions about the cause of the crash.

Civil Aviation Minister Sherif Fathi told reporters an additional challenge in the hunt for the black boxes was the depth of the Mediterranean in the area under search.

That would place the black box locator beacons, which last for 30 days, on the edge of their detectable range from the surface based on the type of acoustic equipment typically used during the first stages of a search, according to a report into the 2009 crash of an Air France jet in the Atlantic.

“No important devices from the plane have been retrieved so far,” Fathi said.

Greece’s defence minister claimed the plane made a series of sharp turns before it fell from the sky.

A series of sharp turns

Panos Kammenos said flight MS804 “turned 90 degrees left and then [made] a 360-degree turn to the right” before plunging into the Mediterranean.

Former US National Transportation Safety Board member John Goglia told Associated Press the fact the pilot had made such sharp turns without sending out a mayday call indicated “something catastrophic like a device” had caused the swerves.

Mr Goglia said a mechanical failure was not out of the question, but at this point was unlikely.

But US officials cautioned against media reports blaming terrorism, saying preliminary investigations had found no sign of any such activity.

The review of satellite imagery did not produced any signs of an explosion aboard the flight, officials from multiple US agencies told Reuters.

A lack of explosion would not rule out terrorism altogether.

If terrorists are to blame for the crash, it will likely mean European cities will be forced to even further ramp up their airport security, despite the increased surveillance being felt by passengers since the Paris and Belgium attacks.

Despite the flow of information from the airline being slow, EgyptAir has already made moves to commemorate the 66 passengers and crew lost in the tragedy.

Just as the MH370 flight route was renamed MH360 after its disappearance, route MS804 has already been renamed MS802.

EgyptAir also altered its Twitter page to reflect the tragedy, changing its cover image to a read ‘MS804’ in black lettering with a faded sky background.

Australian-UK national a father of two

Most of the 66 passengers were French and Egyptian, but Richard Osman was a dual citizen of Australia and Britain.

“A very admirable person and a lot of people admired him for his strength and values,” he told ITV news.

It’s believed Mr Osman was flying to Cairo for work.

Alastair Osman said he and his family were trying not to listen to conflicting media reports about how the plane had gone down.

“Time is the only thing that will get us closer to the truth,” he said.

Graffiti promised ‘We will bring plane down’