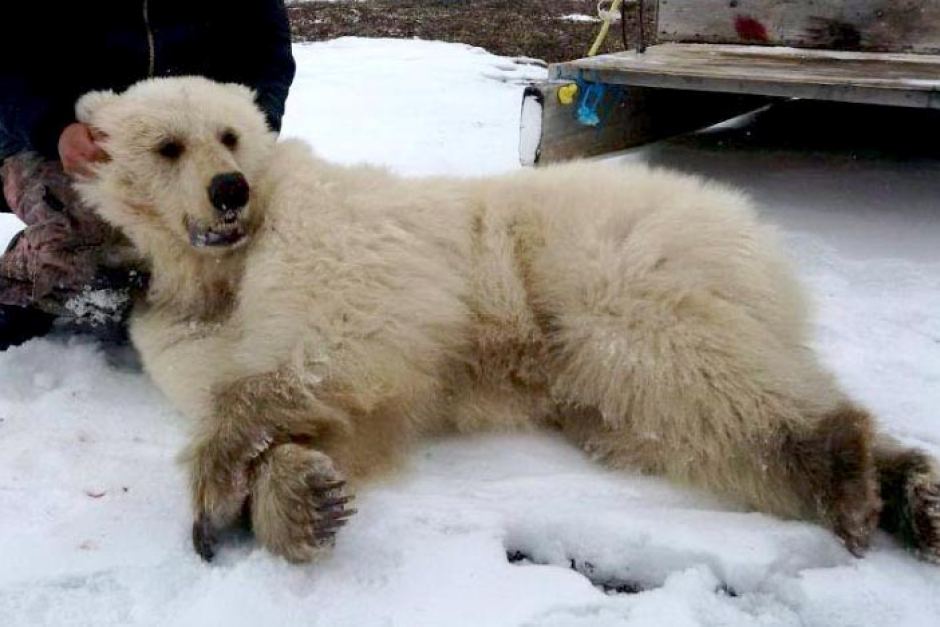 An unusual bear shot by a hunter days ago in Nunavut, a territory in northern Canada, is thought by experts to be a “grolar” or “pizzly” bear.

The grizzly-polar bear hybrid has only been found a few times.

But some scientists say the two bear species are breeding more often because climate change is causing them to cross paths.

Chris Servheen, a bear biologist and Adjunct Associate Research Professor at the University of Montana, said sightings of this hybrid bear species have been very rare in the past.

“But they seem to be more common now,” he said.

Mr Servheen said not very much was known about the grolar and pizzly bears, as little contact had yet to be made between them and humans.

The recent photo of what many suspect to be one of the hybrid bears was posted on Facebook by hunter Didji Ishalook, who shot it when it was sighted near his home community of Arviat.

If the father was a grizzly bear then the offspring is informally known as a grolar.

But when the father is a polar bear, the baby bear is instead called a pizzly.

The offspring share similarities in appearance with both parents.

“The ones that have been seen, and there haven’t been too many so far, are usually lighter in colour,” Mr Servheen said.

“They often have dark, darker fur rings around their eyes. Their paws can often be dark too or at least around the toes.

“And then the claws are often longer than polar bear claws because grizzly bears have much longer claws, and in general the fur is a little bit darker than a polar bear.”

Mr Servheen said it was hard to know how many of the bears existed.

In 2006 a bear shot by hunters in the Arctic was tested and confirmed as a polar-grizzly hybrid. Mr Servheen is among a group of scientists who believe climate change is causing the polar and grizzly bears to come into contact more often.

“As you know, as the climate warms there is less and less sea ice in the Arctic,” he said.

“But as there’s less and less ice, they’re spending more and more time on land.

“And also what’s happening is that grizzly bears seem to be moving further north, we’re seeing their range extend further north toward the coast of the Arctic both in Alaska and in Canada.

But Mr Servheen said not very much was known yet about these ‘grolar’ and ‘pizzly’ bears.

“We don’t know anything about their temperament,” he said.

“You know, both species, they try and avoid humans and stay away from humans.

Climate change could be behind grizzly-polar bear hybrid