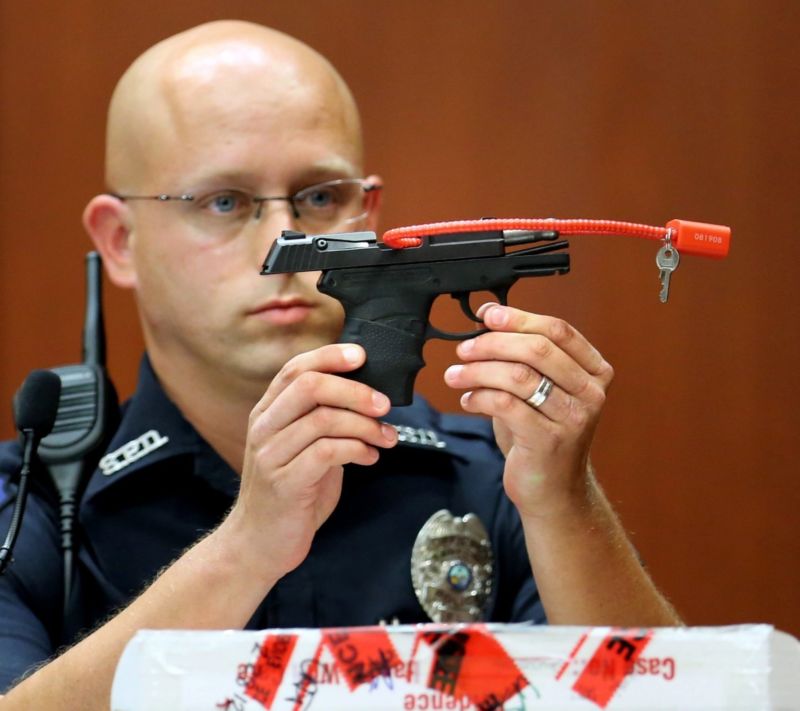 The Florida man who shot and killed black teenager Trayvon Martin, triggering civil rights protests across America, has put his gun on a second auction website – after it was dropped by a site that wanted no part in the sale.

The one-day auction of George Zimmerman’s pistol initially had been scheduled to kick-off on Thursday, 11am local time ,with a minimum price of $US5,000 ($A6800).

But the website, GunBroker.com, said in a statement that it had rejected the user-generated listing and had no relationship with Zimmerman.

“We want no part in the listing on our website or in any of the publicity it is receiving,” the statement said.

Zimmerman told the Orlando Sentinel the auction site was not prepared for the web traffic and publicity surrounding the sale.

He said the gun was now for sale at unitedgungroup.com with the same $5000 starting bid.

In the earlier auction listing, Zimmerman had described the Kel Tec 9mm pistol as “a piece of American history.”

He told a local television station it was his to do with as he pleased, despite receiving death threats over his plan to sell it.

“What I’ve decided to do is not cower,” he told Orlando broadcaster WOFL. “I’m a free American. And I can do what I like with my possessions.”

Zimmerman said the US Department of Justice recently returned to him the gun he had used to kill the unarmed Martin on February 26, 2012.

Zimmerman was acquitted of second degree murder and manslaughter charges over the incident, which sparked civil rights rallies and brought scrutiny of Florida’s controversial “stand your ground” law.

The law allows a potential crime victim who is “in fear of great bodily injury” to use deadly force in his home or in public places.
It also says there is no obligation to retreat.

Zimmerman, who was a neighbourhood watch volunteer at the time, has maintained that the shooting was in self defence.

Martin’s family said the teenager was simply passing through the residential area on his way home from a convenience store.

President Barack Obama said after Zimmerman’s acquittal that Martin “could have been me, 35 years ago” and urged Americans to understand the pain African Americans felt over the case.

Daryl Parks, a lawyer for Martin’s family, said the offer to sell the weapon was offensive, but that the family remained focused on their work advocating against gun violence.

“George Zimmerman” quickly became the top trending term on Twitter in the United States on Thursday, with many users on the social media site expressing shock and revulsion.

“The only people worse than George Zimmerman are the people who bid on that gun,” tweeted journalist and columnist Lyz Lenz.
National Review columnist Charles C. W. Cooke said Zimmerman “may have acted legally, but the man is a sociopath.”

On the GunBroker.com auction site, Zimmerman said he planned to use part of the proceeds to fight Black Lives Matter, a movement that grew out of the incident, as well as to counter “violence against law enforcement officers.”

“I am honoured and humbled to announce the sale of an American firearm icon. The firearm for sale is the firearm that was used to defend my life and end the brutal attack from Trayvon Martin,” Zimmerman wrote on the site.