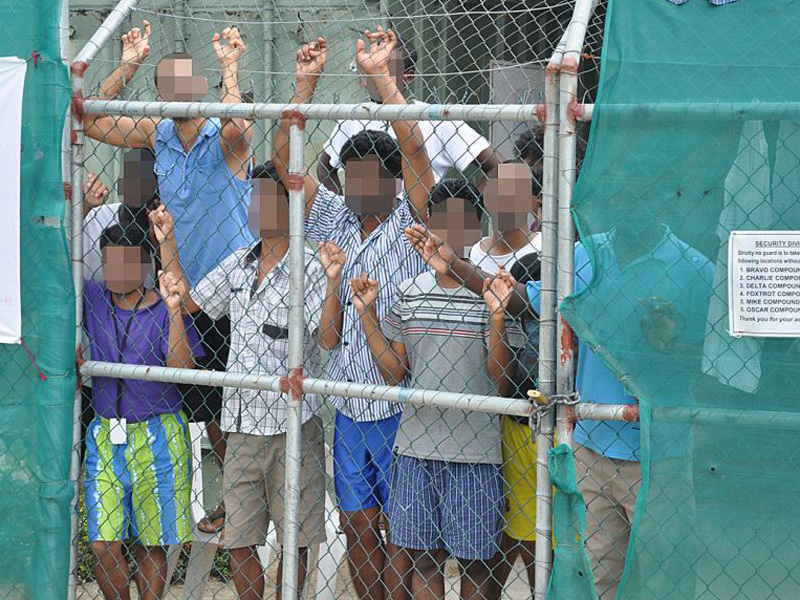 Refugees wanting to move to the US have been given forms outlining the support that will be provided if they are accepted. Photo: AAP

Papua New Guinea’s Supreme Court has ordered the Australian and PNG governments to immediately “take all steps necessary” to end the illegal detention of asylum seekers on Manus Island.

The five justices ruled unanimously on Tuesday afternoon that indefinite detention breached the right to personal liberty contained in the PNG constitution.

But, the future of 850 men being held in the Manus Island detention centre remains in limbo, as senior Australian ministers provide conflicting advice on whether the detainees have any hope of being resettled in Australia.

“Both the Australian and Papua New Guinea governments shall forthwith take all steps necessary to cease and prevent the continued unconstitutional and illegal detention of the asylum seekers or transferees at the relocation centre on Manus Island and the continued breach of the asylum seekers or transferees constitutional and human rights,” the judges ordered.

Immigration Minister Peter Dutton has been in direct talks with Papua New Guinea’s Minister for Foreign Affairs and Immigration Rimbink Pato after the country’s Supreme Court ruled detention of asylum seekers was illegal.

The central pillar of the Australian government’s asylum seeker policy has been to deter people from trying to reach Australia by boat by vowing to send them to another country and prevent them resettling in Australia.

Mr Dutton has stressed that policy remains firmly in place – a key platform of the Abbott government’s 2013 election win.

“The option of coming to Australia is not open and will not open in the future,” he told the ABC’s AM program.

The decision imperils the continued existence of the Manus Island facility, one of only two offshore detention centres currently operational, which are used by the Australian government to deter asylum seekers.

“No one who attempts to travel to Australia illegally by boat will settle in Australia,” Mr Dutton said in a statement.

“Those in the Manus Island Regional Processing Centre found to be refugees are able to resettle in Papua New Guinea. Those found not to be refugees should return to their country of origin.

“People who have attempted to come illegally by boat and are now in the Manus facility will not be settled in Australia.”

About half of the 850 men currently in the facility have been found to be legitimate refugees. It would be a breach of international law to return these men to their country of origin. As suggested by Mr Dutton, those whose applications have not succeeded could be returned.

Both groups are illegally detained because their freedom of movement is breached, the PNG Supreme Court found.

The future of the facility is uncertain. No Australian ministers suggested on Tuesday that it would be closed.

To keep it open, Australia would presumably need to convince the PNG government to amend its constitution or make changes to the facility to make it comply with the constitution.

Labor Shadow Immigration Minister Richard Marles called on Mr Dutton to travel to PNG immediately to sort out the issue.

“We [Labor] negotiated a 12-month agreement with Papua New Guinea for the use of Manus Island as an offshore processing facility in the expectation that the vast bulk of people would be processed and settled in that period of time,” he said.

“Instead, we’ve seen a complete failure on the part of the Turnbull government.”

Mr Marles would not be drawn on whether remaining detainees should be transferred to Australia, saying instead that it was important that the people smuggler trade did not restart.

The Greens called on the government to close the facility and bring all remaining detainees to Australia.

Mr O’Neill said that the centre had “done a lot more damage for Papua New Guinea than anything else”.

“We need to process [the detainees], we need to resettle them, we need to move them back to their country of origin if they are not genuine refugees, but we cannot hold them there forever,” he said.

Mr O’Neill also raised concerns about the costs of resettling refugees, saying that his country “does not have the resources”.