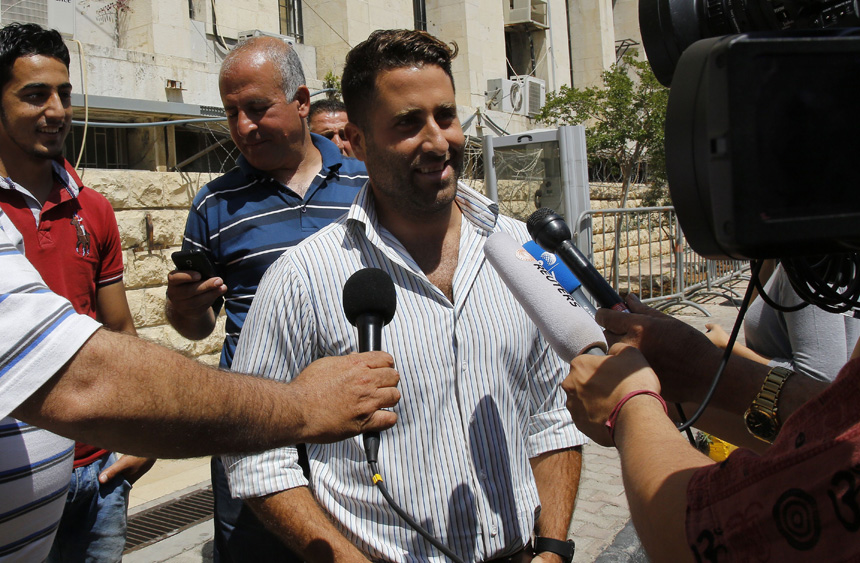 The father at the centre of the 60 Minutes kidnap drama has denied receiving payment from Channel Nine as part of a deal that freed the TV crew and his estranged wife – a denial that clashes with alleged new evidence.

The 60 Minutes team touched down in Sydney late on Thursday night to a media throng, before being quickly escorted to two vans waiting outside and whisked away.

Earlier on Thursday evening, father Ali al-Amin told Channel 10’s The Project that he “didn’t sign on any money”, but was less definitive when asked if anyone connected to him had been paid by Nine.

The Daily Telegraph reported exclusively on Thursday night that the official settlement registered with the prosecuting judge in Lebanon included a $US500,000 payment to Mr al-Amin. It also cited a person “close to the negotiations” who claimed further payments were made to Mr al-Amin’s family by the network.

This report contradicted what Mr al-Amin told The Project. When asked by host Carrie Bickmore if he or anyone close to him was paid, Mr al-Amin said “I can’t comment on that” before embarking on a rambling and non-sensical answer to the question.

He was then asked by co-host Waleed Aly and responded with a firmer denial: “Yeah, no, no one directly involved.”

Earlier on Thursday, rumours swirled about an alleged multi-million dollar payment by the Nine Network to Mr al-Amin for the release of the crew and Ms Faulkner, but The New Daily could not confirm or identify the source of those rumours or their accuracy.

The five Australians were arrested and imprisoned two weeks ago after men reportedly acting on orders from Ms Faulkner seized her children, Lahela, 6, and Noah, 4, from a Beirut Street as they were walking with their Lebanese grandmother.

On Wednesday evening (AEST), a Lebanese judge released Ms Faulkner and the Nine Network crew on bail after Ms Faulkner’s estranged husband dropped all charges against them.

Charges against the abduction professionals remained.

Reports say that a six-figure bail payment by the Nine Network was exchanged for their freedom as the five Australians were released into the custody of the Australian Embassy.

Mr al-Amin told The Project he knew ahead of time that an abduction was being planned. Elsewhere, the father has said this was because he still had access to his wife’s email account.

This prompted Ms Bickmore to ask: “If you knew about this ahead of time why not stop it before your kids had to go through that trauma?”

In reply, Mr al-Amin replied that, after one earlier attempt, he did not think the agency would try again.

“They did a practice run on Tuesday and they saw me and didn’t do anything,” he said.

“I figured okay, she backed off and she would come and talk to me about it.

“But no, they pulled me away to the beach and did what they did.”

His reference to being pulled away to the beach was explained in another interview, where he said he believed that a customer who insisted on booking a surf lesson that morning was connected to the abduction.