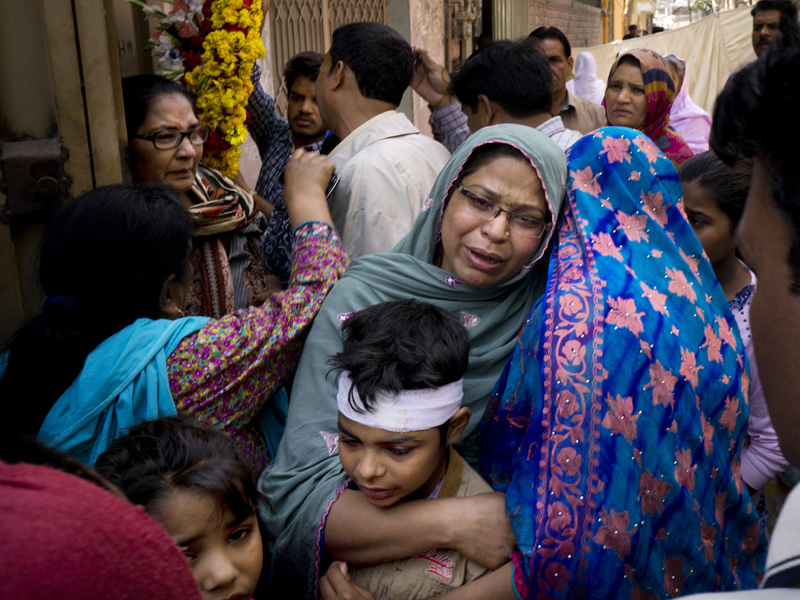 In an emotional televised address Pakistan’s Prime Minister Nawaz Sharif has vowed to hunt down and defeat the militants who have been carrying out attacks like the Easter bombing that targeted Christians and killed 72 people.

As the country began three days of mourning after Sunday’s suicide bombing in the eastern city of Lahore in a park crowded with families, Mr Sharif said the army would forge ahead with a military operation on extremist hideouts and police will go after what he called the “cowards” who carried out the attack.

“We will not allow them to play with the lives of the people of Pakistan,” Sharif said.

• At least 65 dead, 300 injured in suicide blast
• Suspect in custody after shooting at US Capitol Hill
• Belgium releases ‘man in hat’ over lack of evidence

“This is our resolve. This is the resolve of the 200 million people of Pakistan.”

Jamaat-ul-Ahrar, a breakaway Taliban faction that supports the Islamic State (IS) group, claimed responsibility and said it specifically targeted Christians.

But most of those killed were Muslims who also had been in the popular park for the holiday.

Many women and children were among the victims, and dozens of families held tearful funerals Monday for their slain relatives.

At least 300 people were wounded.

Mr Sharif, who cancelled a visit to the US to attend a nuclear summit, also warned extremists against using Islam to justify their violence in the overwhelmingly Muslim nation.

Pakistan had suffered a series of attacks in recent months, and Sharif said militants are hitting “soft targets” like playgrounds and schools because military and police operations are putting pressure on their operations.

Mr Sharif met with security officials earlier in the day, and raids and dozens of arrests were carried out in eastern Punjab province, where several militant organisations are headquartered.

The prime minister also visited hospitals in Lahore where many of the injured were being treated.

“It strengthened my resolve when I met the wounded people,” he said in his address.

“God willing, I will not sit idle until I bring smiles back on their faces.”

The attack underscored both the militants’ ability to stage large-scale attacks despite a government offensive and the precarious position of Pakistan’s minority Christians.

At the Vatican, Pope Francis decried what he called the vile and abominable bombing against Christians and urged Pakistani authorities to “make every effort to restore security and serenity” in the country, particularly for religious minorities. In recent weeks, Pakistan’s Islamist parties have been threatening widespread demonstration to protest what they say is Sharif’s pro-Western stance.

They have also denounced draft legislation in Punjab province that outlaws violence against women. Earlier this month, Sharif had officially recognised holidays celebrated by Pakistan’s minority religions, including Easter and the Hindu festival of Holi.

But of the 72 dead from Sunday’s attack, 14 have been identified as Christians and 44 as Muslim, said Lahore Police Superintendent Mohammed Iqbal.

The rest have not been identified.