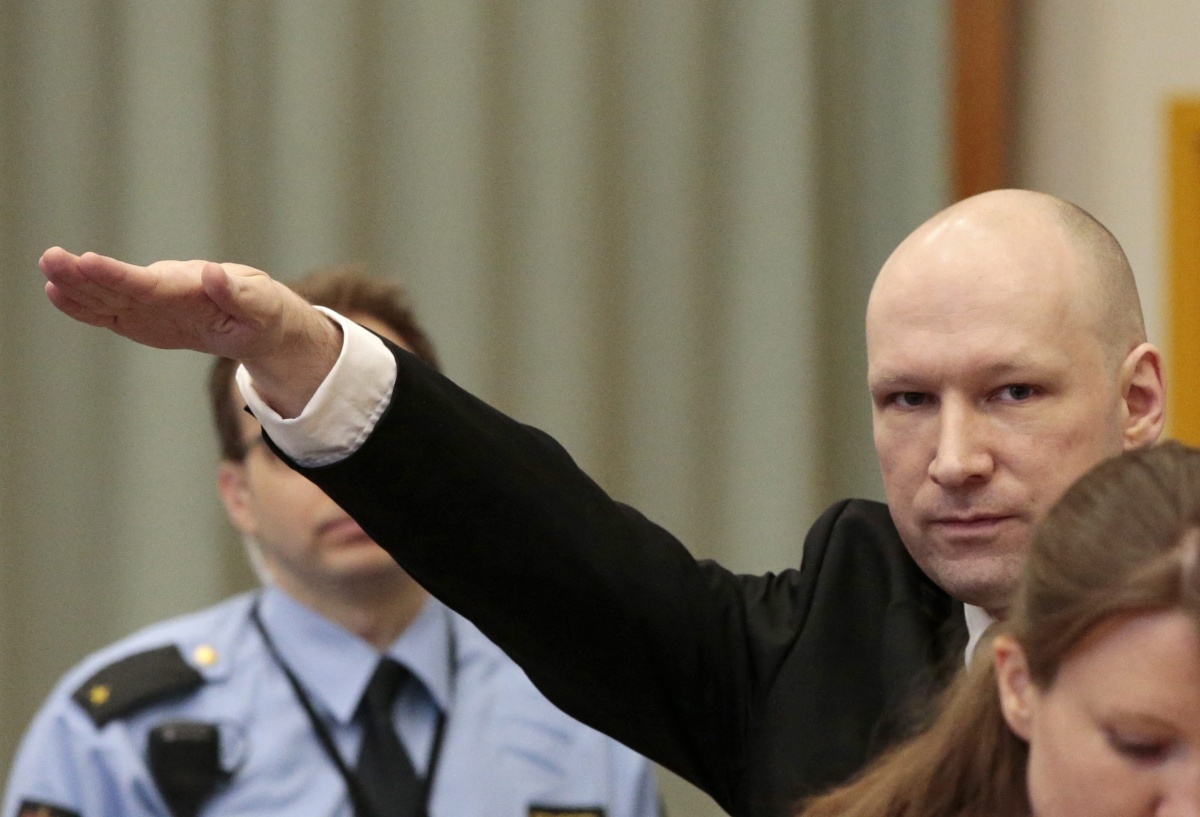 A convicted mass murderer serving a 21-year sentence for Norway’s most horrific acts of violence since World War II has launched court action over “inhumane” prison conditions that he said violated his human rights.

Anders Behring Breivik killed 77 people in a shooting rampage and a bombing near Oslo in 2011 and was sentenced to more than 20 years in prison for the horrific act.

Lawyer Oystein Storrvik argued that the terms of his client’s detention, including being held in isolation and having his correspondence censored, were “inhumane and degrading” and violated the European Convention of Human Rights.

Appearing in public on Tuesday evening (AEST) for the first time since his trial, which ended in August 2012, the Norwegian right-wing extremist performed a Nazi salute as he entered the makeshift courtroom in the gymnasium of Skien high security prison.

It was considered too dangerous to hold the hearing in Oslo.

Breivik has been held in isolation to serve out his 21-year sentence, which came with the condition of a minimum 10-year term.

The 37-year-old can move between three cells – one for living, one for studying, one for exercise – but was denied contact with other inmates at the Skien jail, a two-hour drive south of the capital of Oslo. He has been incarcerated there since 2013.

His cell also featured a television, a computer without internet connectivity and a games console. The console was the subject of a hunger strike threat in February 2014, after Breivik complained about the quality of video games available on it.

He was also able to prepare his own food, do his own laundry, and interact with prison staff.

The civil case was launched against state authorities, which issued a written reply to the Oslo District Court in early March that said: “The measures which have been applied to the plaintiff … are well within the limits of what is permitted.”

Representative for the state Marius Emberland said the restrictions were necessary.

“There are limits to his contacts with the outside world which are of course strict – it pretty much has to be that way – but he is not totally excluded from all contact with other people,” he said, The Guardian reported.

Victims’ support groups encouraged family members of those slain in the July 22, 2011 bombing at Oslo’s Regjeringskvartalet (the Government quarter) and massacre of political youth camp on the island of Utøya, to avoid the trial.

There were four seats in the courtroom reserved for victims’ relatives.

“The coming trial is a major trigger for many people,” Support Group leader Lisbeth Kristine Røyneland said in the lead-up to the case, Norwegian new service The Local reported.

“The whole case is simply absurd. The state – that’s us, so therefore it feels very strange.”

Breivik said the aim of the 2011 attacks were to punish the Labour Party, then in office, over its failure to stem the flow of Muslim immigrants and multiculturalism.

Breivik was scheduled to testify on Wednesday. The trial ends on March 18.