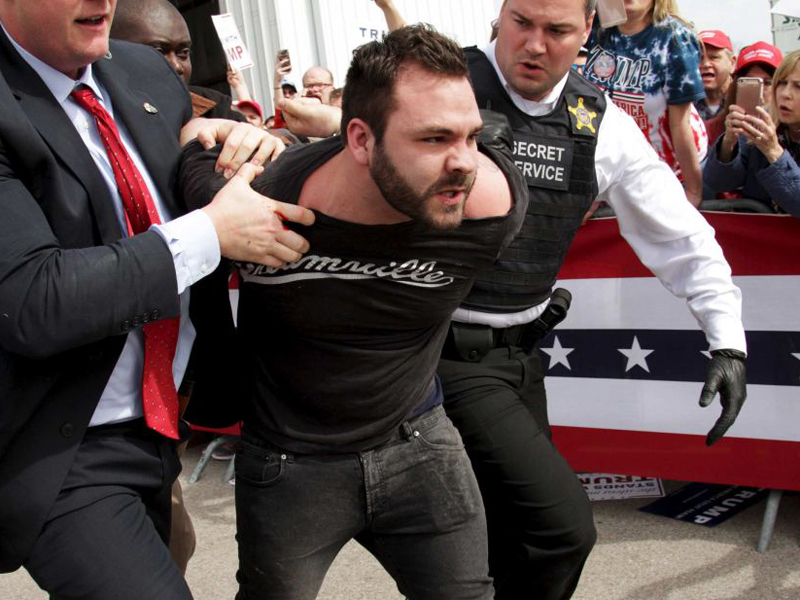 US Republican presidential candidate Donald Trump claims an attempt by a protester to storm the stage at a campaign event in Ohio was “probably ISIS-related”.

Secret Service agents leapt on stage to protect Mr Trump, after a male protester jumped a safety barrier and tried to rush the stage during the event.

The New York Times, citing the Montgomery County Sherrif’s Department, named the man as Thomas Dimassimo. US media said he had a history of political protesting.

• Did The Simpsons predict a Trump presidency?
•  Trump’s Chicago rally called off amid scuffles
• Republican women starting to turn on Trump

The newspaper said he had been charged with inducing panic and disorderly conduct.

Later, at another rally in Kansas, Mr Trump claimed his staff found evidence the protester was possibly linked to the Islamic State terrorist group.

“They found his name, and it was probably ISIS-related,” Mr Trump said.

“Then they go online and find the guy is playing all sorts of very, let me say, music you wouldn’t be liking, dragging an American flag along the sidewalk, making all sorts of gestures, having all sorts of things on the internet and he’s possibly or probably ISIS-related.”

Shortly after Mr Trump’s plane touched down in Ohio, the presidential contender began addressing party supporters who had waited for him at the airport.

The Republican began berating a demonstrator, who also joined the crowd.

But a sudden movement behind the stage startled Mr Trump, and agents swarmed the podium as a man who tried to reach the billionaire was escorted out of the venue.

Secret Service agents ‘took him out’

Mr Trump said he was upset the protester faced court and was released by a judge.

“Our courts need to get tougher, and harder and smarter or … we’re going to be in a lot of trouble as a country. We already are.”

Mr Trump thanked the Secret Service agents for protecting him, but joked that he was “ready” to confront the protester.

“I don’t know if I would have done well but I would have been out there fighting, folks,” he said, to cheers from supporters.

“He just got to the stage and the Secret Service guys hit him like you wouldn’t believe. They took him out, man.”

The scare came only a day after the billionaire businessman had to cancel a planned rally in Chicago when thousands of demonstrators clashed with supporters.

He blamed supporters of Democratic candidate Bernie Sanders for the incidents in Chicago and called the Vermont senator “our communist friend”.

“Obviously, while I appreciate that we had supporters at Trump’s rally in Chicago, our campaign did not organise the protests,” he said.

But Mr Trump dismissed the notion his extreme statements on immigrants and Muslims had exacerbated tensions, placing the blame squarely on “organised thugs” as he returned to his theme over and over on the campaign trail on Saturday.

Mr Trump’s staff denied earlier suggestions the Ohio event would be cancelled due to security concerns.

“We have a right to speak. We are law-abiding people,” the candidate said.

The brash billionaire has been accused of goading crowds at his campaign events, which are known for being wild affairs.