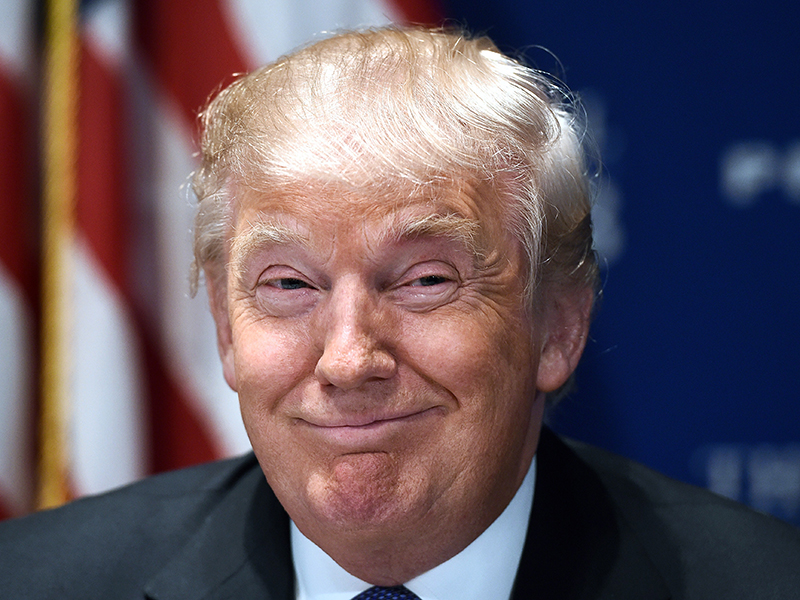 Republican front-runner Donald Trump has cancelled a rally in Chicago after the event turned into a chaotic scene as supporters and protesters scuffled on the sidelines.

A Trump campaign staffer took the stage nearly half an hour after the rally was slated to begin on Friday night (Saturday morning AEDT) and said it would be postponed for safety reasons.

• Did The Simpsons predict a Trump presidency?
• Winners Trump, Clinton turn on each other
• Republican women starting to turn on Trump

A campaign statement issued slightly later said the event would be held on another unnamed day.

Following the announcement, the crowd began to chant and cheer.

Trump’s Republican rivals have condemned the protests, but added that his incendiary speeches were partly to blame.

In statements to the press, candidates Ted Cruz and Marco Rubio both called the incident “sad” and said the people who chanted anti-Trump slogans and scuffled with his fans inside a stadium at the University of Illinois should have respected the candidate and let the rally happen.

But they added that Trump shared some responsibility.

Trump has drawn fervent support as well as harsh criticism for his calls to build a wall along the US-Mexico border and to impose a temporary ban on Muslims entering the country.

His rallies often attract small groups of protesters, but Friday’s was the first at which there may have been as many protesters as supporters.

The cancellation followed an appearance by Trump in St. Louis, Missouri earlier on Friday during which protests forced the front-runner to halt his speech repeatedly.

“Go home to mommy,” Trump said as security personnel ejected one of the protesters in St. Louis.

In Chicago, scuffles broke out as signs were ripped from hands and police moved in to break up areas with the most serious conflicts.

Outside the pavilion, chants of “We shut it down!” rippled through the crowd on news of the cancellation.

Trump decided to postpone the event after arriving in Chicago and meeting with law enforcement, his campaign said.

Chicago activists had spent the week leading up to the rally planning how to disrupt it.

One group, Showing Up for Racial Justice, co-ordinated with minority student groups on local campuses, using group email chains and messaging so that protesters could stay in constant communication.

One of the organisers, Nathaniel Lewis, 25, a master’s degree student in public health at the University of Illinois at Chicago, said he was shocked they succeeded in shutting the rally down.

“I’m happy, I’m at peace because we came together as a collective,” Lewis said.

“This is the last thing we expected to happen, it shows the power of unity.”

At past events, Trump has said he’d like to punch a protester in the face and promised to pay supporters’ legal fees if they get into trouble.

He’s spoken fondly of the “good old days” when police could rough protesters up without fear of backlash.

Trump on Thursday rejected the idea that he was responsible for the incidents and said some of the protesters at his rallies “are bad dudes and have done bad things”.

And he defended his supporters: “People come with tremendous passion and love for the country,” he said.

“When they see what’s going on in this country, they have anger that’s unbelievable.”