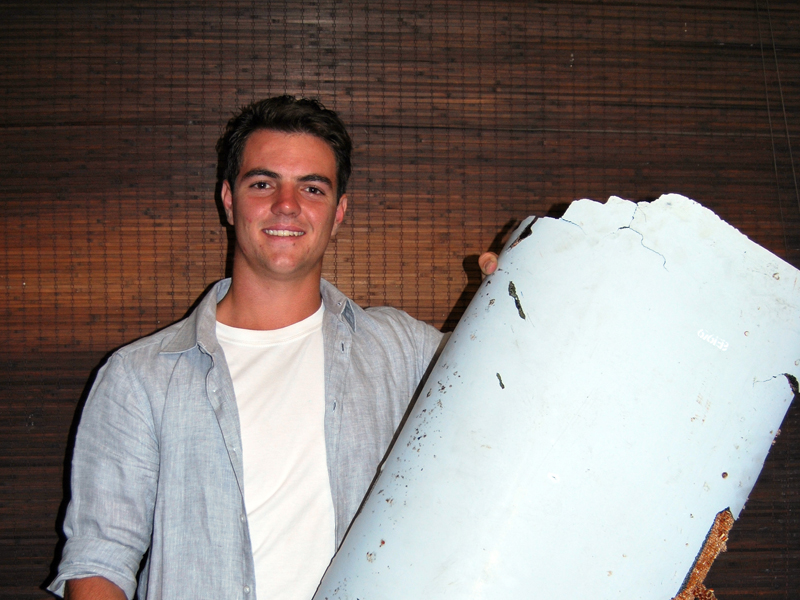 Debris discovered by a South African teenager will be sent to Australia for testing as part of the investigation into the disappearance of a Malaysian Airlines plane two years ago, the South African Civil Aviation Authority (SACAA) says.

Liam Lotter, 18, told South Africa’s East Coast radio on Friday he found the piece of debris on a beach in Mozambique while on holiday in December 2015 and took it back to his family home in South Africa.

“We were quite interested to see what it was so we took it up to the house and my uncle said: ‘No, you found a boat, throw it away, it’s a piece of rubbish,” Mr Lotter recalled.

“I said: ‘No, you know what? I’m going to do some research and see what I can find on the internet.’ And you know what? On the side it has sort of a serial number.”

The white chunk of debris is labelled with the serial number 676EB and bears a resemblance to another suspected debris discovered last month in Mozambique.

In late February this year, American lawyer Blaine Alan Gibson picked up a possible piece of debris on Paluma, a sandbank near the coastal town of Vilankulo, just days before the second anniversary of Malaysia Airlines flight 370’s disappearance.

Mr Lotter said he only realised the potential significance of his find after Mr Gibson came forward with his own discovery.

Mr Gibson’s white, metre-long chunk of metal is being tested by officials in Australia, with help from Malaysian authorities and representatives of manufacturer Boeing Co.

South African authorities plan to hand over the debris found by Lotter to the same Australian team.

“We are arranging for collection of the part, which will then be sent to Australia as they are the ones appointed by Malaysia to identify parts found,” SACAA spokesman Kabelo Ledwaba told Reuters.

Flight MH370 disappeared on March 8, 2014, with 239 passengers and crew on board, shortly after taking off from Kuala Lumpur bound for Beijing. It is believed to have crashed in the Indian Ocean.

A piece of the plane’s wing was washed up on the French Indian Ocean island of Reunion in July 2015.

Matildas will be keen to forget 7-0 drubbing by Spain
Upcoming stats will reveal where and how hard rates are hitting economy
Victorian MPs pocket a tidy 2.75 per cent pay raise
Reserve Bank review isn’t a ‘get the governor’ exercise: Jim Chalmers
‘Violence for weeks’ feared after landmark US abortion ruling
Aussie Hannah Green within striking distance of Women’s PGA Championship lead
Nations to back climate deal
Today's Stories