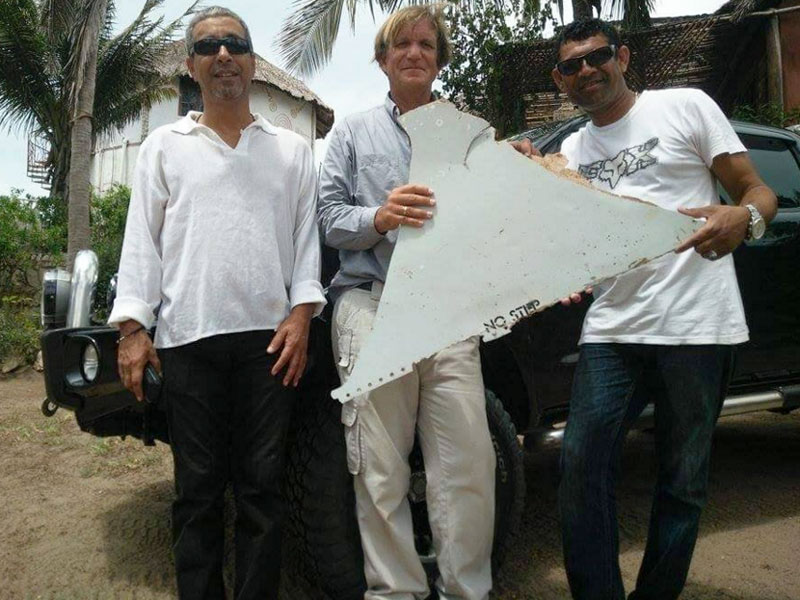 Aircraft wreckage uncovered by an American blogger on an independent search for MH370 has a “high possibility” of originating from the same type of plane as the doomed craft, according to Malaysian officials.

A triangular piece of metal, about one metre in length, was found washed up on a Mozambique beach last weekend and could be from the missing MH370 airplane, which disappeared on March 8, 2014, with 239 people on board, including six Australians.

Seattle lawyer Blaine Alan Gibson picked up the piece on Paluma, a sandbank near the coastal town of Vilankulo, just days before the second anniversary of Malaysia Airlines flight 370’s disappearance.

Mr Gibson has spent the past year travelling the world on a self-funded search, and consulted experts, like the University of Western Australia’s professor of coastal oceanography Charitha Pattiaratchi, along the way.

Prof Pattiaratchi told The New Daily the movement of the Southern Indian Ocean meant La Réunion Island (where an MH370 flaperon part was found in July) and Mozambique had both been highly likely to come into contact with any debris floating through the ocean.

Mr Gibson told CNN that it had “never occurred to me that I would find something like this here”.

“It’s almost like a dream,” he told the network. “I don’t know if it’s from 370 or another plane. Whatever it is, even if it’s not from 370, it raises awareness that people need to look for stuff on beaches.”

The map below shows the area the debris was found:

‘These are real people with real pain’

Mr Gibson joined the independent search for the plane after meeting the families of some of the 239 people on board the flight when it dropped off radar screens.

“These are real people with real pain. Anything that can bring answers, I want to help,” he said.

His search has taken him across the world, including Myanmar, the Maldives and La Réunion Island, before he headed to Mozambique and chartered a boat last weekend.

In a blog post he detailed a conversation with a man on Kuda Huvadhoo in the Maldives who claimed to have seen an aircraft pass overhead about 6.15am on March 8 two years ago.

“[He] saw a large jet plane fly towards him from 301 degrees northwest, past him to the corner of the island, and make a right turn heading south and slightly east (168 degrees),” Mr Gibson wrote.

“He could clearly see the rows of windows and red stripe on the white plane as it made its turn.”

‘High possibility it is from Boeing 777’

According to Malaysian transport minister Liow Tiong Lai, “based on early reports [there is a] high possibility” the metal piece, which could be the right-hand horizontal stabiliser, or tailfin, was from a Boeing 777 craft, the same type of aircraft as the MH370.

However, in the same statement he said reports from people who handled the part indicated it was made of fibreglass composite on the outside, with aluminium honeycombing on the inside – features that were not synonymous with the missing plane.

“Let’s wait for the verification, don’t jump the gun, it is too early to say we are launching a search,” he told reporters in Kuala Lumpur on Thursday afternoon.

The part was now being transported to Australia where it would be examined by local and Malaysian experts, and international experts.

“The location of the debris is consistent with drift modelling commissioned by the Australian Transport Safety Bureau (ATSB) and reaffirms the search area for MH370 in the southern Indian Ocean,” Australian Minister for infrastructure and transport Darren Chester said.

If confirmed it would be the second piece of the missing aircraft identified since it disappeared in 2014.

Last September, French investigators confirmed a flaperon that washed up on La Réunion Island in July 2015 was from MH370. The American blogger who may lead us to MH370