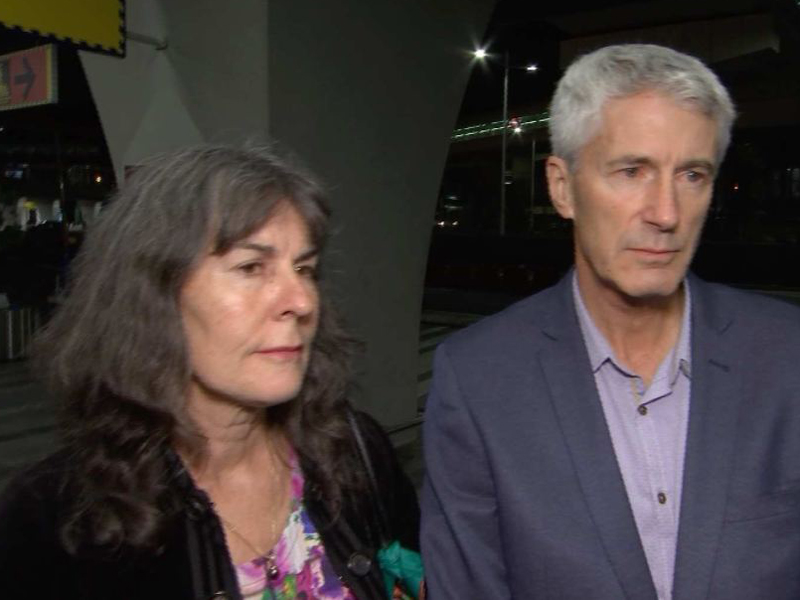 The parents of two girls who were abused by a paedophile priest have arrived in Rome ahead of Cardinal George Pell’s highly-anticipated royal commission appearance.

Anthony and Chrissie Foster were among the first of an estimated 20 people — including survivors, their families and counsellors — to travel from Australia to watch Cardinal Pell’s testimony from a hotel.

“We’re here with some trepidation, of course. It’s been a very big decision to come over here and we wouldn’t have if we didn’t think it was very important,” Mr Foster said, as they left Rome’s Fiumicino airport.

“We really thought there should be victim representatives to hear what Cardinal Pell has to say.”

Other Australians will arrive on Saturday (local time).

Many have high hopes that their presence in Rome will put pressure on Cardinal Pell to offer more information about what he knew about offences being committed by Catholic priests.

“There’s a high level of anticipation but really this is effectively a hearing in Australia and one of many that have been held particularly in regards to the Catholic Church,” Mr Foster said.

“This is, in some ways, just another one but in so many ways it’s a very, very important hearing, because it is Cardinal Pell and he’s created the atmosphere of anticipation by not going back to Australia and so it’s gained worldwide attention.”

One of the survivors, Peter Blenkiron, who was abused by a Christian brother in Victoria when he was 11, said an amnesty for witnesses of child abuse should be explored.

He said it was possible some witnesses at the royal commission, who may have had knowledge of child abuses, were withholding the truth in fear they could be penalised under charges of concealment.
Mr Blenkiron said it was important all options were explored, including talks with Victoria’s Attorney-General about a possible amnesty, so that the truth can come out.
“We create a shift, we do a Nelson Mandela, and create an amnesty for a period of time, so that anybody that gives all the information – if you’re [an] offender you go to jail – but all the information comes forward instead of this pattern of denial that’s around certain parts of it,” he said.

The State Attorney-General said he had received no such request, but would give any request consideration.

Mr Blenkiron said there had been a theme of ambivalence from people giving evidence at the Ballarat hearings.

“[Ronald] Mulkearns has apologised, the Christian brothers have apologised, but when details are asked around exactly who knew specifics it’s, ‘I cant remember, I had no recollection’,” he said.

“It’s like one of those woody dolls with a string, you just pull a string and different phrases keep coming out.”

The 209 room Hotel Quirinale where Cardinal Pell’s hearing will be held is sold out and security is expected to be tight.

The four-star hotel has an interesting history. It was built in 1865 and is directly connected to the Opera House behind.

The allied forces took it over during WWII, with New Zealand using it as their headquarters.

The Verde room is this weekend being used for a party, but royal commission staff will shortly move in and set up the equipment and facilities to enable Cardinal Pell to participate in a video-link to their headquarters in Sydney.

His inability to travel to Australia because of ill health and his seniority in the Catholic Church have sparked intense interest with Vatican watchers in Rome as well as international media organisations planning to attend the hearing.