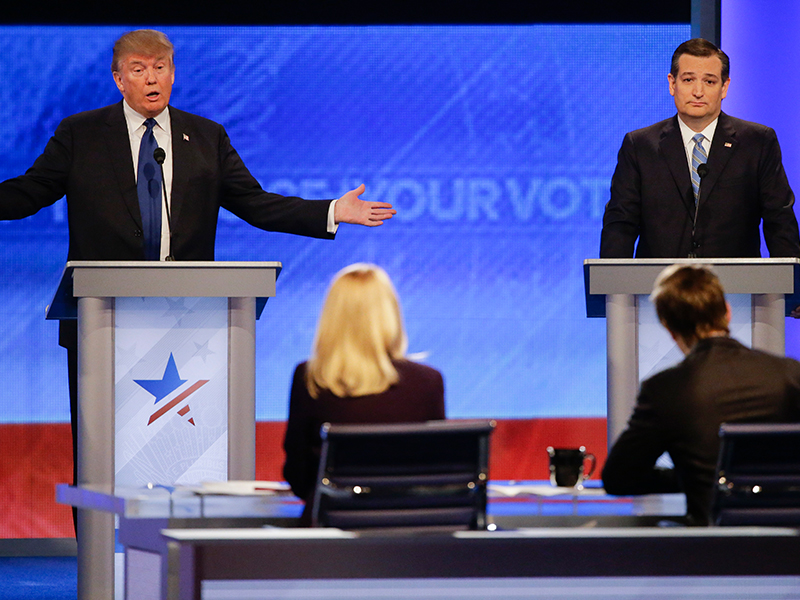 I was in the United States for the start of the presidential campaigns. One night, while bored in my hotel room, I started channel surfing and hit upon the latest reality TV program that is the Republican Primary Debate season, starring the likes of Ted Cruz and Donald Trump.

After listening to them I wondered if they wanted to destroy Islamic State or strengthen it.

Trump declared that he would bring back waterboarding – a practice widely believed to be torture. He also said he’d like to bring back ‘much worse’ than waterboarding, whatever that means.

• Why getting tough on Islam will not work
• ‘You are being targeted’: former terror suspects
• Boots or no boots in Syria?

Texas Senator Cruz said he thought Syria should be carpet bombed, and then the US should leave the region. No reconstruction.

So what would be the natural consequences of these policies?

Think back to Abu Ghraib. When the stories of prisoner mistreatment, torture and waterboarding at the hands of US authorities leaked to the wider world, did terrorists quake in fear at the prospect of having their testicles electrocuted, or did such actions give the terrorists a huge recruitment tool that inspired many others to join their evil cause?

Most believe the latter. Most also believe that the quality of information obtained from torture and waterboarding is so poor that it does not justify the practice. Certainly when I was in the military we were taught that information gained under torture is wholly unreliable.

Hence the natural consequence of Trump’s policy suggestion would be an increase in terrorist recruitment. And Trump knows this.

If someone promotes a policy in full knowledge of the outcomes, does this not mean that they support the outcomes?

Is Trump secretly an IS supporter? He seems to want to give them a great recruiting tool for little benefit in return.

Let’s turn to Ted Cruz’s suggestion to carpet bomb Syria and then leave.

There is a fundamental truth often ignored in the public debate on how to tackle geopolitical instability: economic development is key to post-war recovery. The old adage used by Bill Clinton was “It is the economy, stupid”.

In Germany and Japan, the commitment to rebuilding and reconstruction, integration into the world economy, and defence against aggressors (read the Cold War) lasted three generations. It is this rebuilding of the economies that ensured Japan and Germany did not return as aggressors, as happened after World War I.

Piles of rubble would be built up. Many thousands of innocent civilians would die or be maimed. The relatives of those people would be angered by the US for seeing their innocent loved ones killed and injured.

The lesson to take from successful interventions in Germany and Japan, and failures in Iraq and Afghanistan is not ‘don’t invade’. The right lesson is ‘if you do invade then make sure you have a multi-generational commitment to reconstruction, rebuilding and the creation of civil society in full respect of the vanquished cultural norms’.

So what will Cruz’s policy suggestion of ‘carpet bombing’ Syria and then leaving likely do?

Some terrorists would die. But indiscriminate carpet bombing would also see the economy destroyed giving an entire generation or two no hope for the future.

Piles of rubble would be built up. Many thousands of innocent civilians would die or be maimed. The relatives of those people would be angered by the US for seeing their innocent loved ones killed and injured.

A recently publicised MI5 report shows that most homegrown terrorists have not been particularly pious religious fanatics, have often been new converts to religion and come from many different demographics.

Religion, according to MI5, is not the major factor. The one common thread in extremist attacks in the west is that homegrown terrorists almost always come from low-paying working backgrounds.

So the Cruz solution is to create a couple of generations of desperate people with no hope for the future who are angry at the US for killing their innocent families. Oh, and he’d kill a few terrorists.

But how many times more terrorists would Cruz create by throwing innocent people into worse poverty with no hope, and incentivise them to hate the US?

Again, like Trump, Cruz knows that this is the outcome to his policy. Does Cruz somehow want to strengthen IS?

It worries me deeply that some think Western powers could get in and out of Syria in a quick surgical strike. The West shows no appetite for long-term reconstruction. Without the appetite for long-term reconstruction any intervention is doomed to fail and policy makers will only extend the life of the ‘war on terror’ to be yet another gift given to the generation that follows us.

I can just hear the future grandkids now: “Gee, thanks Grandpa.”

Andrew MacLeod is a visiting professor in Public Policy at Kings College London, and a former high level official for the UN working in the Islamic world. He can be followed on Twitter @AndrewMMacleod. Why a Trump victory is exactly what IS wants