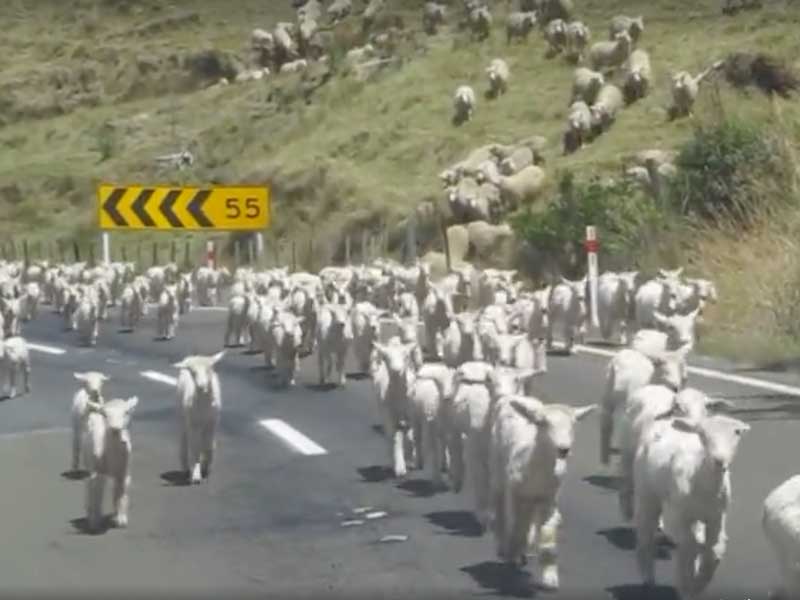 A video showing hundreds of sheep travelling down New Zealand’s mountainside, blocking a Gisborne road in the process, has gone viral.

The video was taken in Waioeka Gorge by woman travelling through the north-eastern city of Gisborne.

It has received over 1.9 million views and has been shared over 43,000 times on Facebook.

The woman who took the video, Emmeline Holly Allen, said in her post: “My favourite video I’ve ever filmed!!! I think?”

“Magic moment for me. Make sure you can have the volume on as that’s half the fun,” Ms Allen added.

The animals can be heard throughout the video with Ms Allen commenting on the never-ending run of what appear to be freshly shorn sheep sweeping by.

“Look at how far they go, all the way down the road,” she said in the video.

Some users chimed in with ovine puns, pointing out the animals seemed “sheepish” after being “Shawn” – an apparent reference to popular children’s cartoon Shawn the Sheep.

Gisborne is usually known for its surfing beaches but this video shows that for some lucky individuals, a horde of sheep may just be lurking behind a nearby mountain as well.

My favourite video I’ve ever filmed!! I think? Magic moment for me. Make sure you can have the volume on as that’s half the fun 🙂