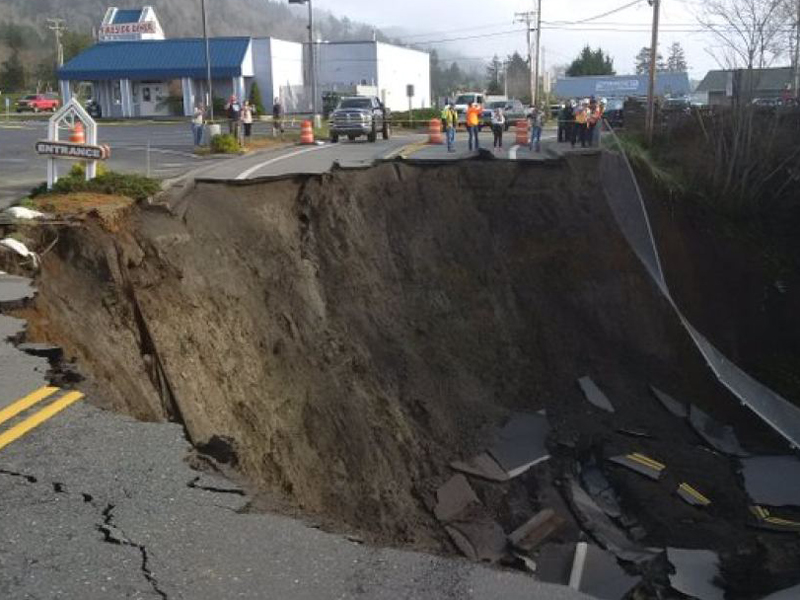 A “monster” sinkhole has swallowed up chunks of a main highway in the US state of Oregon and joined forces with another hole that opened last month.

The initial sinkhole happened in December in a parking lot in the coastal town of Harbor in the state’s south-west, after torrential rain.

The city was again battered by rains yesterday, triggering a landslide and another sinkhole just off Highway 101, which is a major route for motorists.

Jared Castle, a spokesman for the Department of Transportation, said he believed the two sinkholes had joined up to create a giant hole in the highway.

“It’s a monster for sure. This is a very unusual event and is a sinkhole of a magnitude that we don’t see but once every couple decades,” he told The Washington Post.

Drone footage taken by local Kyle Rice revealed the vast size of the sinkhole, which is still growing.

It revealed just how close the sinkhole has come to businesses and restaurants, including the Fireside Diner.

The diner’s manager Tharon Fox made light of the situation that has left his business without parking.

State officials have created a detour route for drivers until repairs are finished, which could take at least a week.

Mr Castle said the detour would only add five to 10 minutes’ to commutes, and added that sinkholes and landslides were common in the area.

“It’s just part of the battle of having the Oregon Coast Highway located where it’s at. It’s a road built in a place where Mother Nature never intended for there to be a road,” he told NBC News.