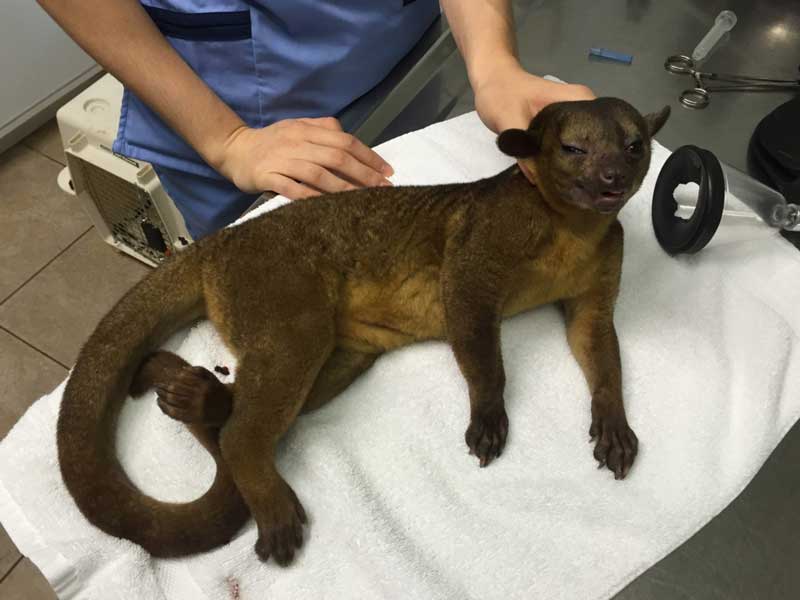 Waking up to find an intruder in your bedroom would be scary enough without finding the trespasser lazing about on your chest.

This was the terrifying scene an unidentified 99-year-old Florida woman was roused to on Monday night, when she woke to find a kinkajou caressing her face.

Justifiably, the woman’s response was to scream in panic, drawing the furry mammal – which was not a fan of sudden movements or noise – from its invasive catnap to scurry into the attic of her Miami home.

Another woman, Cathy Moghari, was able to identify the animal and helped to remove the nocturnal fruit eater from the home with the irresistible lure of stonefruit.

“I start thinking: ‘how are we going to get this animal out?'” she told WPLG.

“So I Googled kinkajou sounds and found a video [with the noises].

“I was holding it up to the ceiling, and we hear a rumbling. And, sure enough, it came out to the opening that we had in the ceiling.”

They then used cherries to tempt the frightened animal into a cage.

It was taken to Miami’s South Dade Avian and Exotic Animal Medical Center on Tuesday, where it was tranquillised and examined and found to be in “excellent health”, according to the organisation’s social media page.

“I had to tranquillise her,” veterinarian Don Harris said.

“Because this animal was scared and could have struck back with a bad bite.”

Kinkajous are usually found in the rainforests of South and Central America, but with a special permit United States residents can legally welcome the generally quiet and playful mammal into their home.

It is a close relative of the racoon, and resembles a small primate easily mistaken for a ferret or monkey, although it isn’t closely related to either.

The owner, Ray Fernandez, contacted the vet on Wednesday to claim the nomadic creature, revealed to be called ‘Banana’.

Banana had apparently slipped out in the dead of night while boarding with Mr Fernandez’s relatives, and had been on the run for about a week.

“I left food out and a trap but I never found her … she was pretty far from where she escaped,” he told CNN.

Banana has reportedly returned to her own bed and is probably enjoying life as much as this Colombian kinkajou.