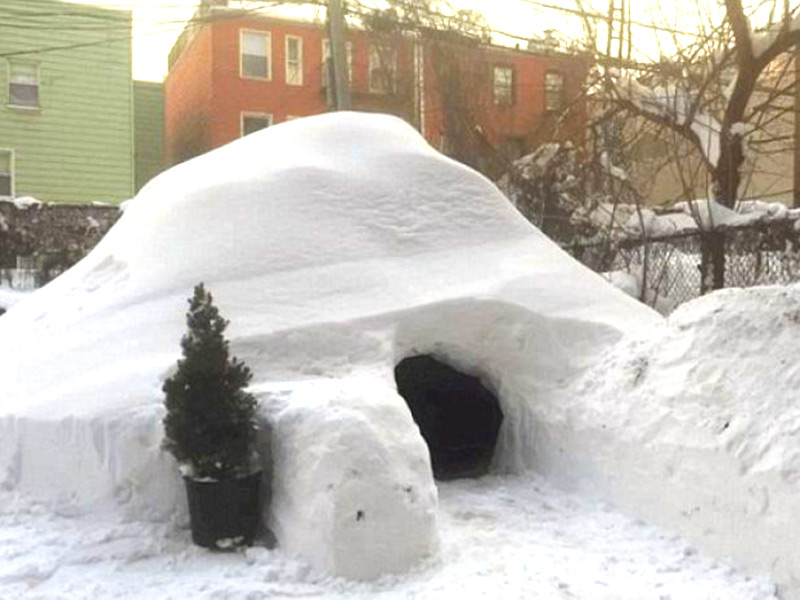 A New Yorker says he is not sure if he should be “excited or depressed” about the reaction to an igloo he built and listed on Airbnb during the US blizzard.

The listing from Patrick Horton, 28, invited people to “come experience this chic dome-style bungalow … built completely by hand, all natural”.

The storm during which it was built – dubbed Snowzilla – killed at least 25 people after it walloped several states over 36 hours on Friday and Saturday.

• Astronaut shares photos of Snowzilla from space
• Could this be the next Australian flag?
• What we know so far about Apple’s iPhone 7

New York’s Central Park had the second-highest accumulation of snowfall in the city since records began in 1869.

Mr Horton told the ABC he and his roommates, Justin Seeley and Griff Hones, built the igloo by hand over two days in their Brooklyn backyard.

“We thought people would enjoy it, but we didn’t expect all of this,” he said.

“I don’t know if I should be excited or depressed that the greatest thing I have done so far in my life is build an igloo.”

Mr Horton said the trio built the igloo by hand with a couple of shovels.

Although the Airbnb listing was partly in jest, Mr Horton said he received requests.

“We had five people ask about it to rent before it was taken down,” he said.

Airbnb notified Mr Horton it was removing the “Boutique Winter Igloo for 2” with a sense of humour.

“We are happy to see that you guys are staying busy and having fun during Blizocalypse,” the email read.

“Unfortunately, your igloo, while very well constructed, has failed to meet our occupancy standard and has been removed from search results.

“As an appreciator of fine igloos around the world, I did want to offer you a coupon that you can use to book your first reservation as a guest.

“Be sure to pick a place with running water, electricity, and a roof that doesn’t melt.”

Mr Horton said it was strange Airbnb rejected the listing, considering the site did allow igloos to be rented.

But the igloo has lasted longer than its time on the accommodation website.

“So far the igloo is still standing,” Mr Horton told the ABC.