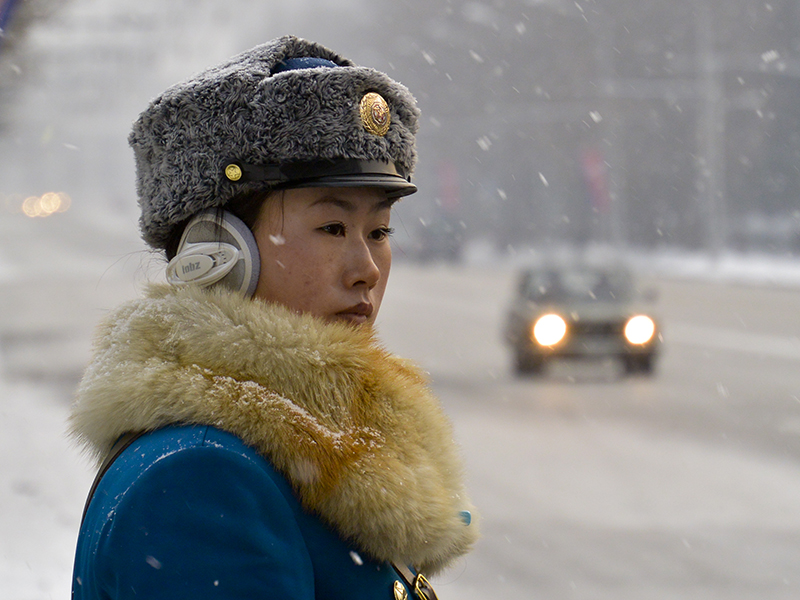 The first thing I noticed about North Korea was the distinct lack of traffic. I told myself the absence of cars on the road must have been due to the Lunar New Year holiday.

In how many developing countries’ capital cities can you take a lung full of air and think ‘ah, that is clean’? It was an early lesson on ‘perspective’.

Our guide told us that the government of the DPRK, in the interests of everyone’s health, encourages people to walk or cycle, and hence the lack of cars. Even at night. Even below zero. This was an early reminder of mass indoctrination.

Another lesson comes from the national mausoleum. Both Kim Il-sung and Kim Jong-il lie in state in the former office of DPRK’s founder Kim Il-sung. ‘Office’ is a term to be used loosely. Palace, bastion, fortress or grand demonstration of the inequality of a dictatorship, might be a better description.

While the country starved through famines, the Kims lived in acres of marble, lit by millions of dollars’ worth of chandeliers. The rich irony is that the masses are now permitted to queue up and enter this grand palace to pay respects to the two leader’s embalmed bodies. The masses feel grateful to be allowed in to the previously forbidden building and somehow don’t get angry at the juxtaposition of the living environments.

On questioning our guides, they didn’t seem to even see the juxtaposition, let alone feel angry about it.

All of the marble and chandeliers could somehow be anticipated. I did not anticipate the gentle sobbing of people who looked upon their departed leaders. Was the sobbing and emotion real? Undoubtedly, in my view, yes.

Having lived in Yugoslavia under Milosevic and spoken with Islamic extremists in Pakistan, I have come to accept, although I may not agree with them, that people who receive only one source of information, believe that single source of information. Humans, when lacking competing information, tend to accept what they are told by those in authority – particularly if they have been through an education system that does not teach independent thought.

If you are in doubt then think of this: one large group of people across the world believe a man died on the cross only to rise again three days later. Others believe in the God of Abraham, but not in Jesus. Others believe the Prophet Mohammad had the direct word of God flow through his fingers. At least two of those three must be wrong – yet around the world in highly educated countries, people believe in those, or other religions with deep passion and sob, flagellate and show deep emotion in rituals of these beliefs handed down over generations.

Religion is a better analogy for the Kims than politics. The personality cult and propaganda around the Kims is more like a religion than mere political control.

• Click the owl to learn more about the People’s Democratic People’s Republic of Korea:

At the De-Militarized Zone, four kilometres separates the North and South across the armistice zone, said to be one of the most heavily armed zones in the world. Kashmir, Golan, DMZ; three areas competing for an honour no-one should want.

At the end of the DMZ tour I pulled aside our additional military DMZ guide – a Colonel, and told him of my military past.

“Soldier to soldier, we all want peace” I said. He smiled, stepped back and we swapped salutes.

For lunch we stopped at a local café. Outside, local kids were taking up the new fad of roller blading. We were permitted to photograph in this tightly controlled space. Strong faces desperately trying to avoid our eyes fled from cameras, lest they be snapped.

Every now and again a brave soul would smile back or risk a wave. A few small children waved back. They were quickly grabbed by parents yet to give the anti-fraternisation lesson normally learnt sitting on parental knees.

Under all the reservation and fear, one gets the feeling that somehow the people still want to reach over and say hello. There is friendliness here, desperate to come out but held tightly inside by indoctrination.

Near the end of the fourth day we were given the news that the Democratic People’s Republic of Korea had undertaken their third nuclear test. Discussion on the bus back to Pyongyang ensued.

For our North Korean guides the capacity to have nuclear technology was a point of pride. It was also, for them, a point of fairness. If others have nuclear weapons and power, why couldn’t they?

Day six saw our train ride back to China. As the train crossed the border we sighed a breath of relief to be welcomed back to the comparative freedom offered by the People’s Republic of China. We would now get the internet, but not Facebook!

At the end of the day my trip to DPRK was more about people than monuments and buildings. One of our guides, a 28-year-old, intelligent young woman, clearly loved the country and her people. She was a normal person like the rest of us. She wondered who she would marry, how many children she would have and what the future would hold for those children. She was no different from most 28-year-old single females anywhere in the world.

I would have liked to have stayed in touch with her and seen what the future brought her and perhaps the family she wanted to have. This question of how to stay in touch demonstrates that divide the politics and leadership places between us, or any other people from within and outside the DPRK.

The way I live my life, with constant travel, makes it very hard to send me an old-fashioned physical letter. I rely on email and social networks. But there is no internet in North Korea. There is no option for a North Koreans to stay in touch by electronic means.

So here we have it, two potential friends reaching across political and cultural divides, separated by politics with no way of being able to stay in touch.

So when reading about the nuclear tests I would say this: the regime that runs North Korea is evil and megalomaniacal. But the people are normal. They are like us. They want the best for their children, but they have been indoctrinated.

We may disagree with the leaders, but let’s also remember the people, and how hard it is for us to stay in touch with people who are just normal souls, like us.

What I discovered inside ‘dangerous’ North Korea