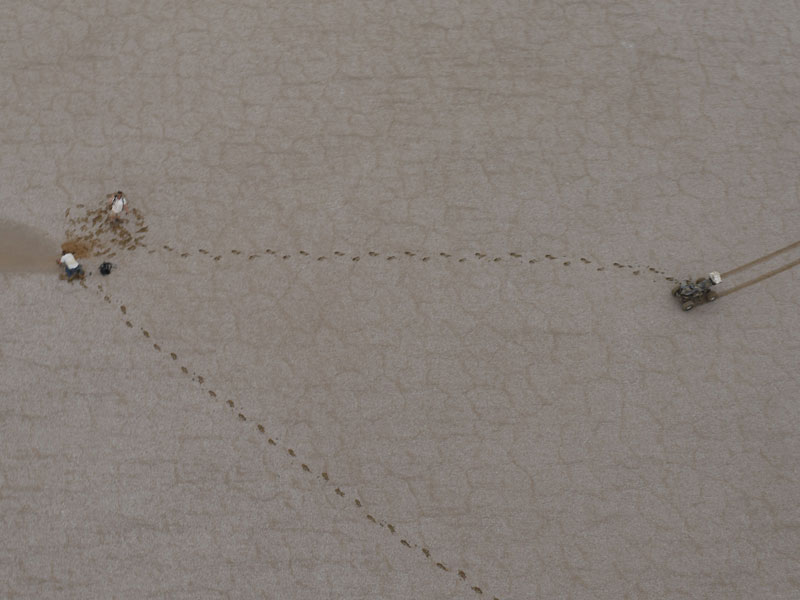 A 1.7kg meteorite recovered with new technology developed by Australian researchers could hold clues to the beginnings of the solar system.

Estimated to be about 4.5 billion years old, the iron rock was pulled from clay at South Australia’s Kati Thanda-Lake Eyre on New Year’s Eve, after it was seen falling to Earth on November 27.

It was believed to be a stony meteorite, a type of primitive asteroid formed in the early days of the solar system.

“On its own it is a big deal because there are so few meteorites with a known orbit,” planetary geologist Professor Phil Bland told The New Daily.

“The reason the orbit is a big deal is because it tells us where it came from.”

It also makes it quite close to unique – of about 50,000 meteorites recovered on Earth, just 20 have a known orbit.

Learning this information can reveal what object the rock came from, for instance a comet, asteroid or planet, and then allow us to expand our knowledge on it, Prof Bland said.

The meteorite was thought to have originated from somewhere between Mars and Jupiter, which are a mere 550 million kilometres apart. The two are separated by the asteroid belt.

“Meteorites give us clues about how the solar system was formed, but until we know where it came from, we miss out on all of that contextual information,” Prof Bland said.

It entered the Earth’s orbit as an 80kg fireball, travelling at 14km per second.

It wasn’t an easy task to uncover the aged rock.

Researchers from Curtin University’s Desert Fireball Network spent an exhausting three days trying to locate it, searching the surface of Lake Eyre from the air and on land.

It was tough to do in Australia’s largest lake, the researchers said.

Although usually dry, heavy rains were predicted for the region around New Year’s Eve, which was when researchers were able to get to the area.

“The fact we have managed to retrieve the meteorite at all is remarkable,” co-researcher Dr Jonathan Paxman said.

“Our people worked around the clock to reduce the data, enabling rapid recovery of something that would have been lost if we’d gotten there any later.

“Observations from the air turned out to be quite critical in the end. The impact site had deteriorated quite considerably in recent rain, and as a result was quite hard to see from the ground.”

Their search culminated with Prof Bland digging 42cm into the soil, at a location about 6km from a remote part of the salt lake’s edge and through thick clay, to retrieve it.

Scientists were able to track its decent using new technology that tracked it using a camera network set-up in the Australian outback.

It was unknown if the automated network worked until the meteorite was uncovered on New Year’s Eve.

When it fell on November 27, it was seen by a number of locals in the William Creek and Marree areas, and captured by the Desert Fireball Network’s cameras stationed at William Creek, Mount Barry, Billa Kalina and Wilpoorina.

“The technology in there allows us to do quite a bit without breaking the bank,” Prof Bland said.

As well as specific data, the pictures sent back were high quality resolution.