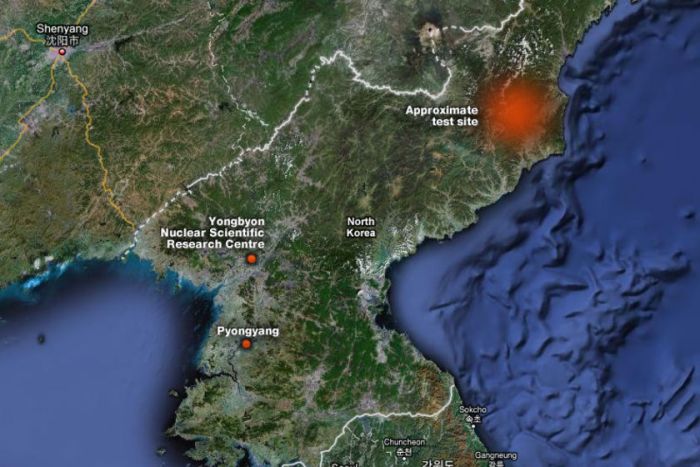 Foreign Minister Julie Bishop has described North Korea’s apparent detonation of a hydrogen nuclear bomb as confirmation of the nation’s status “as a rogue state and continuing threat”.

On Wednesday, North Korea claimed to have carried out a “successful” detonation of a H-bomb, many times more powerful than an atomic bomb, at a test facility thought to be in the nation’s north-west.

According to Western reports of the broadcast, the North Korean announcement claimed the test was a “legal right” carried out for the nation to practice “self-defence” against the US.

“North Korea’s ongoing development of nuclear weapons and ballistic missiles, and its proliferation of sensitive technologies, threaten the peace and security of Australia’s friends and partners in our region and beyond.”

North Korean supreme leader Kim Jong-un said last month his country had the ability to launch a hydrogen bomb, however this was met with scepticism.

He said at the time the work of his grandfather – former supreme leader Kim Il-sung – had “turned the DPRK into a powerful nuclear weapons state ready to detonate a self-reliant A-bomb and H-bomb to reliably defend its sovereignty and the dignity of the nation”.

If the unverified claims from North Korea were true the test would mark an advancement in the nation’s nuclear capabilities.

In the South Korean capital of Seoul, the presidential Blue House called an emergency meeting of the National Security Council as officials scrambled to confirm the precise nature of the tremor.

Earlier, it had been reported by South Korea’s Yonhap that a large tremor near North Korea’s nuclear test facility was suspected to be an explosion.

The website of the China Earthquake Network Centre also described the tremor, which struck at 12:30pm (AEDT), as a “suspected explosion”.

The US Geological Survey (USGS) put the tremor at magnitude 5.1, at a depth of 10 kilometres, with its epicentre 19 kilometres east-north-east of Sungjibaegam — placing it right next to the Punggye-ri nuclear test site.