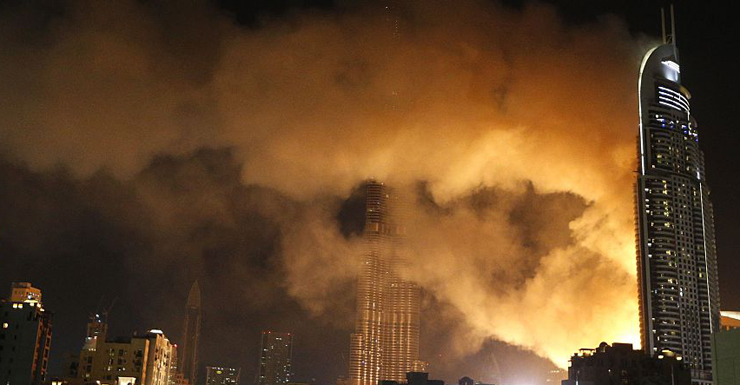 Fire engulfed a 63-storey skyscraper in downtown Dubai near the world’s tallest building, but the block was successfully evacuated and there were only light injuries, the emirate’s police chief says.

Tongues of flame shot skywards from the luxury Address Downtown Dubai hotel and residential block, which stands across a plaza from the 830-metre Burj Khalifa tower where people gathered for a spectacular fireworks display to mark the start of the New Year.

• Live gallery: watch the world ushers in the new year
• Here’s why 2015 was one of the best years on record
• The New Daily presents our top stories of 2015

“All residents of the hotel were evacuated and there are 14 injured, with light injuries,” police chief Major General Khamis Matar told Al Arabiya television.

The Dubai government’s media office said the blaze started on the 20th floor, on the outside of the 300-metre tower, and that internal firefighting systems were operating to try to prevent it getting inside the hotel. Four fire brigade teams were at the site.

A medic on the scene who declined to be identified told Reuters: “There are more than 60 people injured with light injuries from smoke inhalation and from crowding while in the stairs evacuating the building.”

One resident staying on the 15th floor of the tower, completed in 2008, told Britain’s Sky News of “absolute pandemonium” as those inside realised the building was ablaze.

“The alarms went off when the building was already properly on fire,” he said.

The Burj Khalifa festivities went ahead despite the fire, with tourists and Dubai residents treated to one of the world’s largest pyrotechnic displays to usher in 2016.