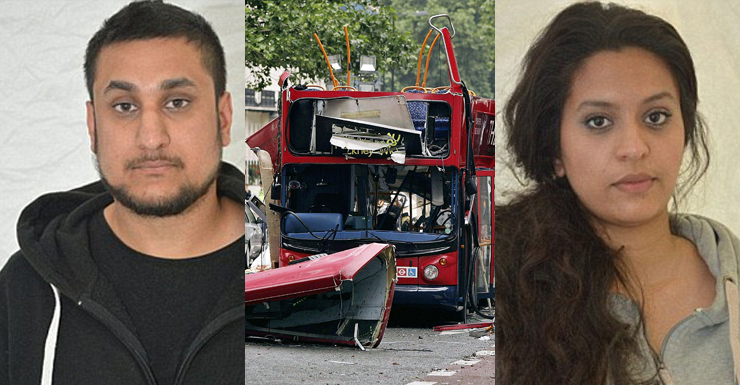 A British court has convicted a husband and wife of planning a major terror attack to mark the 10th anniversary of the London suicide bombings.

Mohammed Rehman, 25, and Sana Ahmed Khan, 24, were found guilty of engaging in the preparation of terrorist acts by a jury at the Old Bailey in London, England’s central criminal court, on Wednesday morning (AEDT).

The couple were caught after the husband sent out tweets asking for advice on which targets he should hit, alerting police to a stockpile of chemicals at their home.

“Westfield shopping centre or London underground? Any advice would be appreciated greatly,” Rehman said on Twitter under the name ‘Silent Bomber’.

The couple, who denied the charges, are to be sentenced at a later date.

The British prosecutor said the two Britons had carried out detailed research into militant attacks, including searching the internet for videos related to the London transport bombings which killed 52 people a decade ago.

“The pair had been very close to carrying out an attack. All they required was to purchase the chemicals to make a detonator,” Susan Hemming, head of the CPS counter terrorism division, said following the verdict.

“There is little doubt that, had Rehman and Ahmed Khan not been stopped when they were, they would have attempted to carry out an act of terrorism in London.”

The couple allegedly intended to mark the anniversary of the London attacks of July 7, 2005 when four young British Muslims detonated homemade bombs hidden in rucksacks on three underground trains and a bus during the morning rush-hour.

Rehman, who was also found guilty of possessing an article for terrorist purposes, had carried out test bombs in his garden which he filmed and sent to his wife, and she had also helped to purchase the chemicals, the prosecutor said.

Britain is on its second highest alert level of “severe”, meaning an attack by militants is considered highly likely. The designation remained the same after the November 13 Islamist attacks in Paris that killed 130 people.