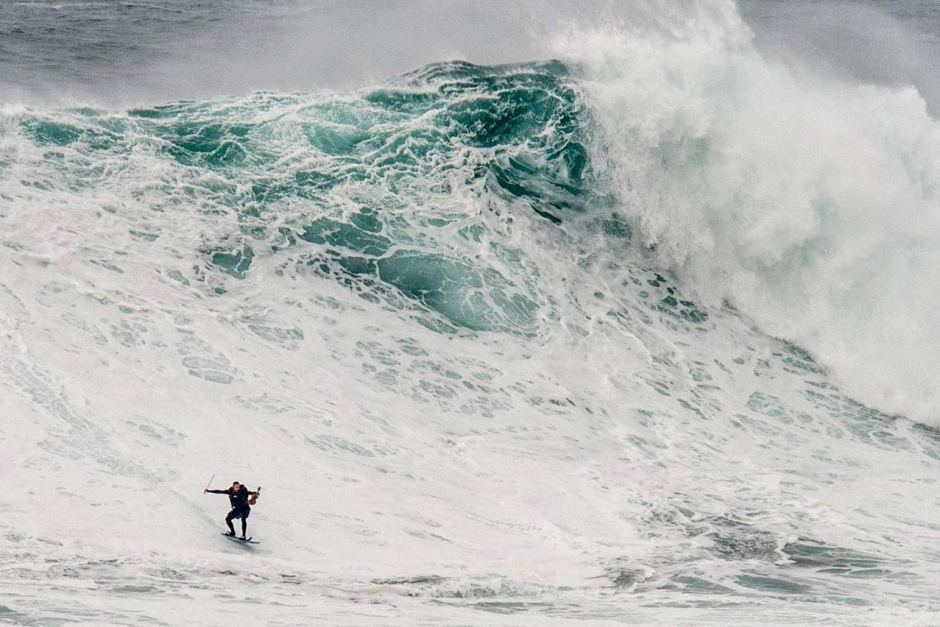 A violinist has surfed a massive wave in Portugal while playing Jingle Bells as part of an extreme art project he calls “A violin in the most unlikely place”.

Santos, who has been training for the ride by “imagining [being] on the wave playing violin over and over every night before going to sleep”, now has his sights set on a 60-foot wave.

• VIDEO: Tourists narrowly escape helicopter crash
• Star Wars church service and the painter with no hands
• The Northern Territory’s pub with no beer

‘I’m [planning] it for February 2016, but it really depends on the conditions,” he said.

He claimed to have the “perfect” song in mind for the wave but he was still waiting on permission from an unnamed British rock band to use their music.

Santos has played his violin on the edge of an active volcano in Ecuador and deep in the Amazon rainforest for the project and he said the idea came about when he was travelling in South America.

“The violin has always been my travelling companion,” he said.

“Since the beginning, the concept has always been to challenge myself physically and mentally as a way to know myself better and become a better person.”

Santos has lost several violins and bows in the big waves and said paying for equipment, which also included surfboards and jet-skis, was one of the biggest obstacles the project faced.

Waves of 60 feet and bigger are a regular occurrence in Nazare, a famed big-wave destination on the east coast of Portugal.

Professional big-wave photographer Pedro Miranda, who snapped the shot of the musical ride, said surfing big waves while playing violin was probably “top of the list” of extreme things he had filmed.

“It’s pretty crazy just to ride big waves in Nazare – it looks like a warzone when it gets heavy,” Miranda said.

“People can easily die out there. Doing that and playing violin at the same time is mental.”

The photographer, who also shot 2015 big-wave champion Sebastian Steudtner when he rode a wave at Nazare estimated to be 60 feet high, said he thought Santos could pull it off.

“Consider this just a warm up for the real deal,” Miranda posted on Facebook with the picture.