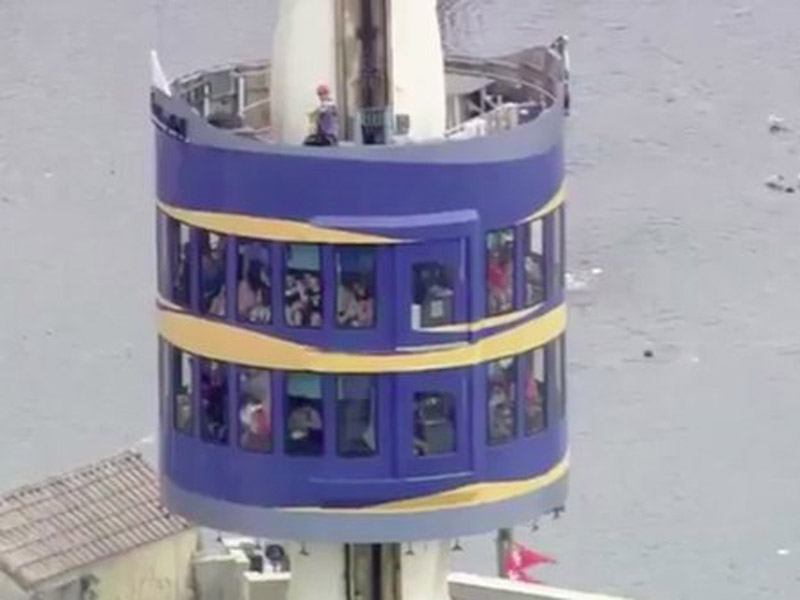 Twitter users have mocked SeaWorld in Orlando, Florida, comparing the plight of park visitors stranded in a ride to animals being held in captivity.

Fifty passengers were stuck for more than three hours in the Sky Tower ride, an enclosed, double-decker capsule that rotates around a 122-metre tower to give passengers a 360-degree view.

The Sky Tower was opened in 1973 and is described by SeaWorld Orlando as “an icon” that “adds a dose of retro-cool to the day’s adventures”.

Local television station WKMG reported that 15 firefighters had been on site at the park, and a woman experiencing a possible panic attack had been removed after a firefighter was airlifted in to the capsule.

Passenger Michael Moffatt told WKMG that “everyone was kind of laughing about it for the most part, a little annoyed, a little frustrating but we knew we couldn’t go anywhere so we made the best of it”.

The park announced on Twitter that all “guests and team members have exited safely” and that medical personnel were working closely with individual guests.

Twitter users used the visitors’ plight to attack SeaWorld for having animals in captivity, with user Rodrick Weir tweeting: “Bizarre new ride allows people to feel the same captivity that orcas feel” and many describing the situation as ironic.

SeaWorld parks have come under sustained pressure to end live shows of orcas, also known as killer whales, since the 2013 documentary Blackfish accused the parks of mistreating orcas.

The release of Blackfish was followed by a significant decline in patron numbers at United States parks, and an 85 per cent collapse in profits.

SeaWorld in Australia distanced itself from how US parks operated, but was criticised for still displaying captive dolphins and other marine mammals like seals and polar bears.

In November, SeaWorld San Diego announced that orcas would no longer perform tricks for spectators, but animal activists said the parks needed to end all captivity for orcas