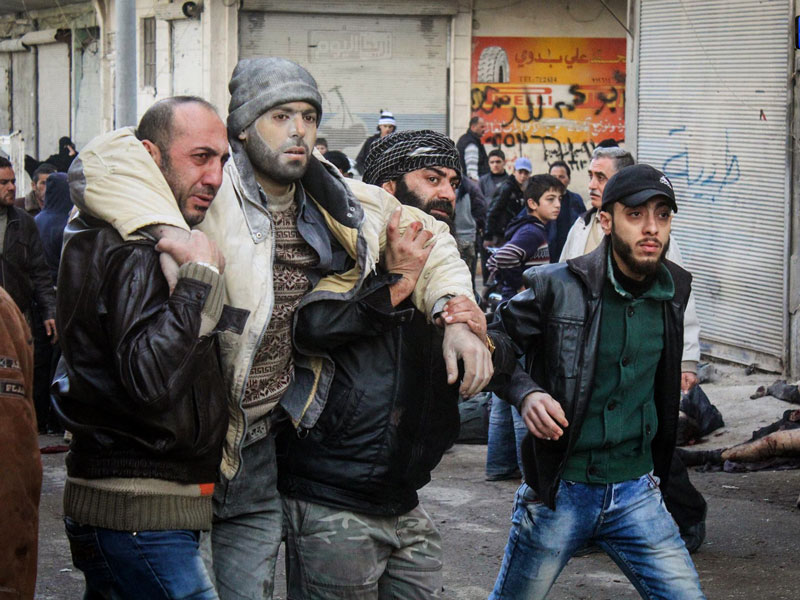 Air strikes believed to have been carried out by Russian warplanes have killed scores of people in the centre of the rebel-held city of Idlib in north-west Syria, rescue workers and residents say.

They said at least six strikes hit a busy market place in the heart of the city, several government buildings and residential areas.

Rescue workers said they had confirmed 43 dead but that at least 30 more bodies had been retrieved that had still to be identified.

• ‘No prospect’ of improved Turkey relations: Putin
• Vladimir Putin is ‘not actually a mad man’
• Turkey has ‘proof’ Russia in oil trade with IS

Over 150 people were wounded with some of the serious cases sent to hospitals in Turkey.

Footage on social media and the pro-opposition Orient TV station showed makeshift ambulances rushing with injured civilians through an area where people were searching for survivors among the debris of collapsed buildings.

One local resident, Sameh al-Muazin, said he had seen mangled bodies in the main Jalaa street of the city, adding that people feared a further round of intensive bombing.

“Everyone is afraid that this is just the beginning,” he said.

Idlib, the capital of a north-western province of the same name, became an important centre for rebel-controlled north-west Syria after it was captured earlier this year by a coalition of Islamist insurgent groups known as Jaish al Fateh which includes Al Qaeda’s Syrian wing Nusra Front.

Russia began a major aerial campaign on September 30 in support of Syrian President Bashar al-Assad, its ally, who earlier in the year suffered a series of setbacks including the loss of Idlib province and other areas of crucial strategic importance.

See the video below for footage of the rescues in Syria