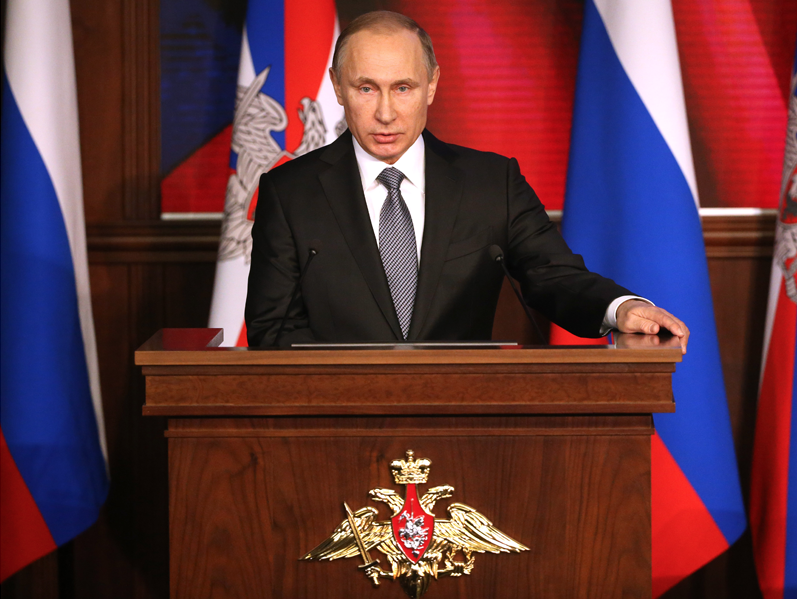 Despite a bizarrely aggressive slur against new enemy Turkey and a track record of abrasive posturing on the international stage, a security expert rates Russian President Vladimir Putin as a clever and calculated diplomat.

On Friday, Mr Putin tore into Turkey almost a week after his navy fired at a fishing boat in the Aegean Sea.

At an end of year press conference, Mr Putin accused the Turks of having “decided to lick the Americans in a certain place”.

The President also accused Turkey of falling victim to “creeping Islamisation” that would have Mustafa Ataturk, founder of the secular Ottoman empire that decriminalised homosexuality in 1858 and promoted education for women, “rolling in his grave”.

An international security expert told The New Daily he rejected characterisations of Mr Putin as a bit of a “mad man”, describing him instead as “centrist” and “pragmatic”.

The Lowy Institute international security expert Matthew Sussex said the Russian leader is using brinksmanship “just to see what others would do”.

“I think that Putin doesn’t do anything without very carefully thinking it through,” Mr Sussex said.

Mr Putin’s outburst was yet another escalation in his retaliation against Turkey’s shooting down of a Russian plane that was straddling the Syrian-Turkish border in November. His damning comments came days after the Russian warship Smetlivy fired a “warning shot” in the north Aegean Sea at a Turkish fishing boat that was allegedly on a collision course with the military vessel.

The former KGB agent has long been criticised for his aggression and shows of strength, especially his invasion of Georgia, Ukraine and the downing of Malaysian Airlines flight MH17, in which Russia may have been complicit.

Mr Putin’s comments this week reminded many of his belligerence.

He said there was “no prospect” of Russia’s relationship with Turkey repairing, following his decision to impose trade sanctions on the nation. And he claimed Turkish officials should have picked up the phone to talk to Russia about their concerns that air strikes in Syria were hitting Turkmen rebels.

The Lowy Institute’s Mr Sussex conceded that “a lot” of conflicts are started by accidents, like Monday’s warning shots or Turkey’s downing of the Russian plane.

“The Russians have repeatedly flown near countries borders, if not into them, on many occasions,” he said.

But Mr Sussex claimed that Putin was simply being pragmatic, given that he is caught between NATO and China, and careful not to be beholden to either.

“I think he is being pragmatic. It is misread as macho-Putin wrestling bears,” Mr Sussex said.

“He has this cult of personality that suits him very nicely.

Internationally, the message he tries to send is we won’t be pushed around.”

Russia and Putin’s record of brinksmanship

Mr Putin has been fuming with his Turkish counterpart – President Recep Tayyip Erdogan – ever since the Russian plane was shot out of the sky.

Mr Putin claimed Turkey shot the plane down to protect anyone finding out about a secret oil trade between Islamic State and Ankara, calling it a “stab in the back”.

“Our military is doing heroic work against terrorism,” he said at the time.

“But the loss today is a stab in the back, carried out by the accomplices of terrorists.”

Last week, a Russian navy vessel was photographed passing through Istanbul as a soldier on deck brandished a rocket launcher.

Turkey must allow ships to pass through the Bosphorus strait during peacetime, according to a treaty signed in 1923.

It is the only passage Russia can use for its Black Sea vessels to access the Mediterranean Sea.

Russia claimed it is committed to fighting ISIS in Syria, however it is also a known ally and friend to controversial Syrian President Bashar al-Assad.

Turkey is a staunch critic of the al-Assad regime and have hosted almost 2 million Syrian refugees fleeing the country.

Russia’s sole Mediterranean base for its Black Sea military fleet is housed at a facility in the Syrian port of Tartous. Vladimir Putin is ‘not actually a mad man’