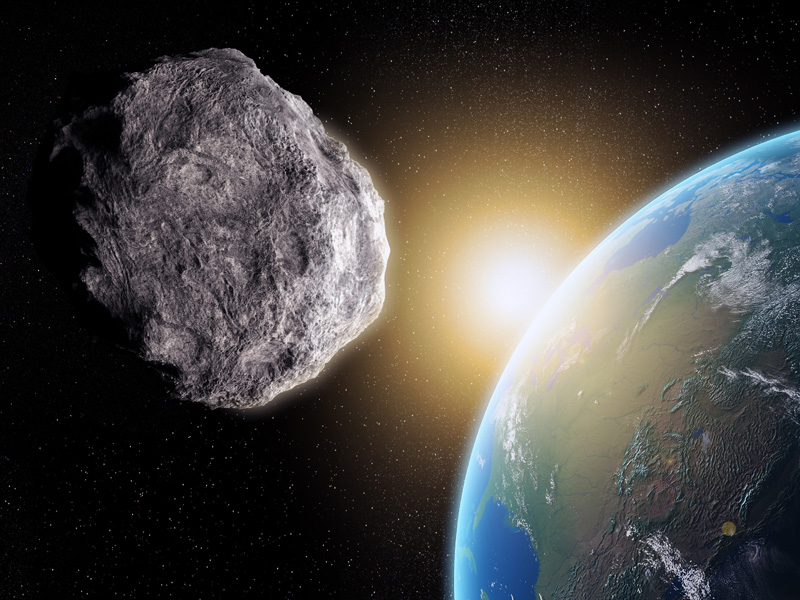 A massive asteroid that has been monitored by NASA since 2003 will pass close to Earth on Christmas Eve, according to a new report.

The asteroid, named 2003 SD220, measures a whopping 2km in length and was first spotted 12 years ago by the “Lowell Observatory Near Earth Object Search Program”.

It is expected to pass by Earth at a distance of 10.7 million kilometres, however the NASA report predicted that it would fly by a second time in 2018 at a closer proximity.

This year, the distance between the asteroid and the Earth is too great to be visible to the naked eye, however professional and amateur stargazers with the correct equipment should be able to catch a glimpse of the event.

“The close approach is on December 24,” the report wrote. “The 2015 apparition is the first of five encounters by this object in the next 12 years when it will be close enough for a radar detection.

“By obtaining radar ranging measurements at each observing opportunity, it may be possible to detect non-gravitational perturbations due to the Yarkovsky effect.”

In plain language, “non-gravitational perturbations due to the Yarkovsky effect” relate to the complex way the object could move through space.

“2003 SD220 is on NASA’s NHATS list of potential human-accessible targets, so observations of this object are particularly important,” it said.

To put the distance between the asteroid and Earth into perspective, the moon is 363,104km from Earth. The closest asteroid to pass our planet in recorded history – named “2008 TS” and passing in October 2008 – did so with a buffer of 12,500kms.

Despite the seemingly harmless distance of 2003 SD220, conspiracy theorists have come out of the woodwork to predict the asteroid could spell armageddon or cause a string of natural disasters.

NASA solar system ambassador Eddie Irizarry wrote in EarthSky that contrary to some media reporting, the asteroid’s passing would not cause natural catastrophes such as earthquakes.

“Don’t believe any media suggesting that this space rock may cause earthquakes. Those assertions are misleading and incorrect,” Mr Irizarry wrote.

“Even if 2003 SD220 were passing closer, it’s doubtful earthquakes would result. In fact, there’s no scientific evidence that an asteroid’s flyby can cause any seismic activity, unless it collides with Earth.”

In August, when rumours of an asteroid being close to Earth in late 2015 began to surface, NASA’s manager of the Near-Earth Object office at the Jet Propulsion Laboratory, Paul Chodas, quashed any suggestion of danger.

“Again, there is no existing evidence that an asteroid or any other celestial object is on a trajectory that will impact Earth,” Mr Chodas said in a statement.

“In fact, not a single one of the known objects has any credible chance of hitting our planet over the next century.”

Since the late 1990s there have been people claiming that a 10th planet [Planet X or Nibiru] will smash into Earth.

And according to these UFO hunters and doomsdayers, December 2015 is the time.

Dubbed the Nibiru Cataclysm, the myth dates back to 1976, when writer Zecharia Sitchin claimed that two ancient Middle Eastern cultures – the Babylonians and Sumerians – told of a giant planet [Nibiru] – that orbited the Sun every 3600 years.

Then in 1995, self-proclaimed extraterrestrial psychic Nancy Lieder announced the crash would occur in 2013 after aliens implanted a warning in her brain.

That never eventuated but some have suggested asteroid 2003 SD220 could be Nibiru.

However, NASA is not so convinced that such projections are genuine.

“Nibiru and other stories about wayward planets are an internet hoax,” NASA wrote.

“There is no factual basis for these claims. If Nibiru or Planet X were real and headed for an encounter with the Earth, astronomers would have been tracking it for at least the past decade, and it would be visible by now to the naked eye.”