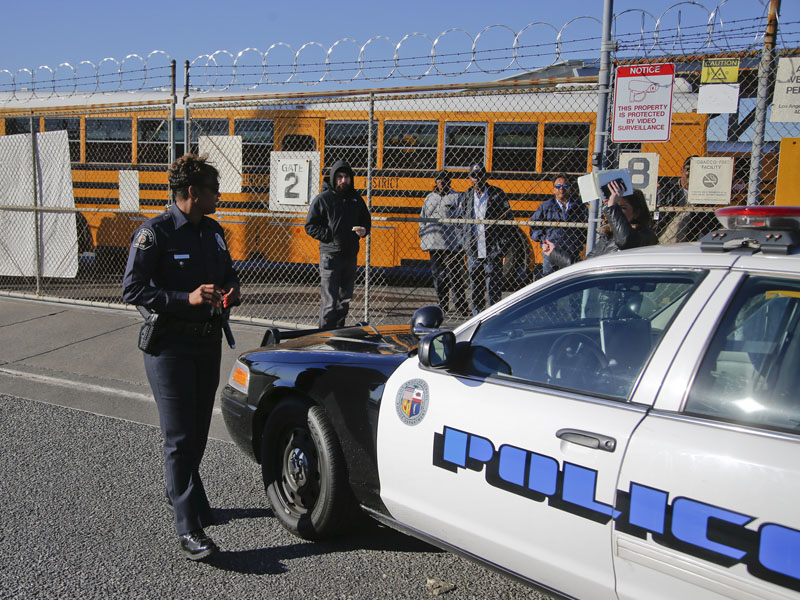 A threatening email from a purported Muslim extremist that forced the closure of every public school in the US city of Los Angeles has been labelled a hoax.

On Wednesday morning (AEDT), local police and the FBI evacuated and searched more than 1000 schools within the nation’s second-largest school district, which has almost 700,000 enrolled students.

Police alerted the Los Angeles Unified School District (LAUSD) to a “credible” threat made to several schools in the area, which mentioned “backpacks and other packages”.

The LA Times reported local politician, Congressman Brad Sherman, as saying the person claimed to be “an extremist Muslim who has teamed up with local jihadists”.

According to the newspaper, the threat mentioned assault rifles, explosive devices, and pistols and was traced to an IP address in Frankfurt, Germany.

“The text of the email does not demonstrate that the author has studied Islam or has any particular understanding of Islam,” Congressman Sherman said.

“The only thing known was that the email was sent by an evil person.”

But a second US congressman, Adam Schiff, of the House Intelligence Committee, said on preliminary assessment the email appeared to be a hoax or something designed to disrupt school districts in large cities.

“The investigation is ongoing as to where the threat originated from and who was responsible,” Mr Schiff said.

During a press conference with local officials earlier that day, LA schools’ superintendent Ramon Cortines confirmed the threat was the cause of the mass closure.

“It is important that in the last four hours, this city, this community has come together on behalf of our students,” Mr Cortines said.

“We are doing everything possible to make sure that children are safe but that also students and parents understand that the precautions we are taking are done in a calming way, are done in a way that is in the best interest of everybody in this particular city.”

Mr Cortines said the district had also reached out to schools in unincorporated parts of the city, which were not technically in the district.

The precautions came almost a fortnight after a bloody daylight shooting spree at a disability and community centre in nearby San Bernardino, which killed 14 people and injured dozens.

The chief of the Los Angeles school police department, Steven Zipperman, also stressed the decision was an extreme precautionary measure.

“Earlier this morning we did receive an electronic threat that mentions the safety of our schools,” he told the news conference.

“In an abundance of caution, as the superintendent has indicated, we have chosen to close our schools today until we can be absolutely sure that our campuses are safe.”

Chief Zipperman said that private schools in the district had remained open since the threat was only directed at the LAUSD.

California is still recovering from the San Bernardino massacre, carried out by US-born Syed Farook and his Pakistani wife Tashfeen Malik.

Authorities believed the Muslim couple had been radicalised for some time and may have been inspired by the extremist Islamic State (IS) group.

The couple were killed in a shootout with police following the massacre, which the FBI is treating as an act of terrorism.

Meanwhile, the New York Police Department (NYPD) confirmed they were responding to a separate threat made to schools in the city, but downplayed its severity.

“These threats are made to promote fear …we can not allow us to raise the levels of fear,” New York City Police Commissioner William Bratton tweeted.

He said, however, that the agency was working closely with the FBI and the LAPD.

During a press conference, Commissioner Bratton said the threat was a hoax and sent by someone who “may have been a Homeland fan”.

He said the threat “mirrors recent episodes” of the program.