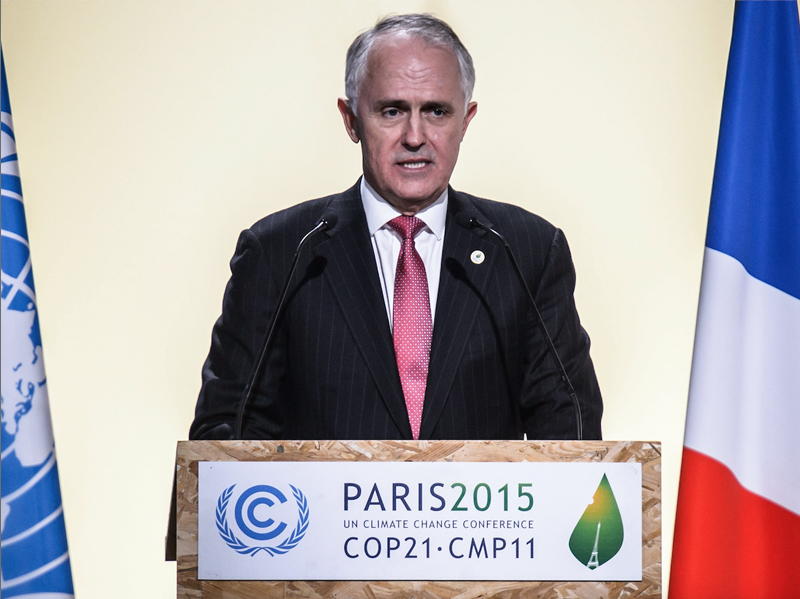 Prime Minister Malcolm Turnbull says Australia will not be daunted by the challenge of climate change and he is confident human ingenuity can help secure the future.

Mr Turnbull is one of more than 150 world leaders in Paris to attend the United Nations climate change talks, where they are accompanied by high expectations as they look to hold back the Earth’s rising temperature.

Mr Turnbull said Australia would contribute at least $1 billion over the next five years to help its Pacific neighbours build climate resilience and reduce emissions.

• What is the UN Climate Change Conference?
• Climate change in Paris, thunderstorms in Canberra
• Turnbull to boost climate investment
• Turnbull ‘optimistic’ for summit

He also announced Australia would ratify the second commitment period of the Kyoto protocol that ends in 2020.

“Some of the most vulnerable nations are our neighbours and we are helping them to build resilience,” Mr Turnbull said.

“Our agreement in Paris must provide a common platform for action. Australia is not daunted by the challenge.

“With great optimism and faith in humanity’s genius for invention, we are confident that with collective leadership we will, with common cause, secure our future.”

The Prime Minister’s comments came after US president Barack Obama called on world leaders to “rise to the moment”, adding the US was ready to take responsibility as one of the largest emitter’s of greenhouse gases.

“The impacts of global warming are already being felt and will continue to be so even after we reach global net zero emissions,” Mr Turnbull added.

“We do not doubt the implications of the science, or the scale of the challenge.”

Mr Obama said a growing threat of climate change could define the contours of this century.

“As the leader of the world’s largest economy and the second largest emitter … the United States of America not only recognises our role in creating this problem, we embrace our responsibility to do something about it,” he said.

“[The] future is one that we have the power to change right here right now, but only if we rise to this moment.”

Poor countries should not have to sacrifice economic growth: Xi

China’s president Xi Jinping has pledged to work with Mr Obama, but said countries should be able to seek their own solutions to global warming.

“Developed countries should honour their commitment of mobilising $US100 billion each year from 2020 and provide stronger financial support to developing countries afterwards,” he said.

“It is also important that climate-friendly technologies be transferred to developing countries.”

Mr Xi also made it clear that poor nations should not have to sacrifice economic growth.

“Addressing climate change should not deny the legitimate needs of developing countries to reduce poverty and improve their people’s living standards,” he said.

“The Paris conference should reject the narrow-minded mentality of a zero-sum game and call on all countries — developed countries in particular — to assume more shared responsibilities for win-win outcomes.”

China is the world’s largest emitter of greenhouse gases on an absolute basis, but the United States emits far more per capita.

The world’s two biggest carbon emitters, once on opposite sides on climate issues, agreed in 2014 to jointly kick-start a transition away from fossil fuels, each at their own speed and in their own way.

That partnership has been a balm for the main source of tension that characterised previous talks, in which the developing world argued that countries that grew rich by industrialising on fossil fuels should pay the cost of shifting all economies to a renewable energy future.

Statements of goodwill not enough: Hollande

French president Mr Hollande, who opened the summit, said that a deal to try to keep any further increase in global temperatures to below 2 degrees Celsius needed to be “universal, differentiated and binding”, with richer countries contributing more than poorer ones.

“I can’t separate the fight with terrorism from the fight against global warming,” he said.

“These are two big global challenges we have to face up to, because we have to leave our children more than a world freed of terror, we also owe them a planet protected from catastrophes.”

After decades of struggling negotiations marked by the failure of a previous summit in Copenhagen six years ago, some form of landmark agreement appears all but assured by mid-December.

Mr Hollande warned that there could not be a vague agreement.

“To resolve the climate crisis, good will, statements of intent are not enough,” Mr Hollande said, telling world leaders that the future of humanity rested on their shoulders.

“We are at breaking point,” he added.

PM won’t be ‘daunted’ on climate