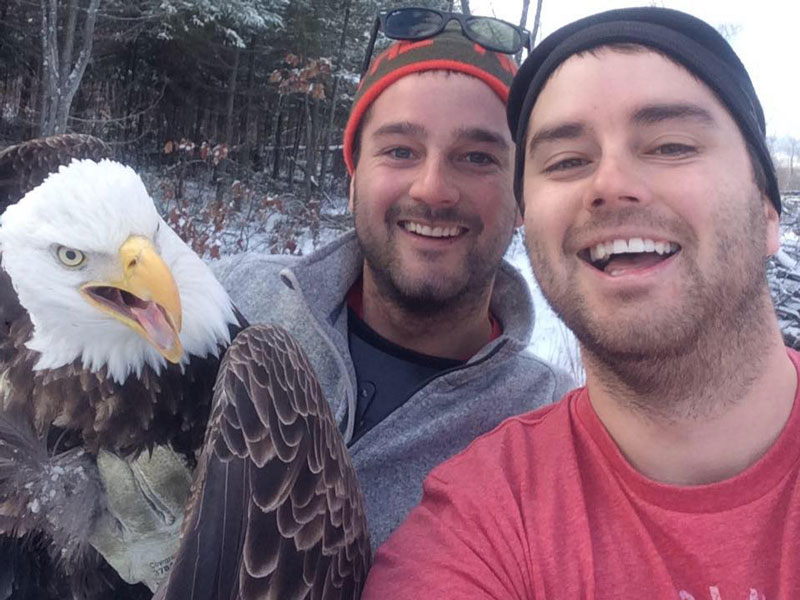 Canadian brothers Neil and Michael Fletcher have been applauded for their “gumption” after releasing one of North America’s largest birds of prey from a trap.

While they were hunting grouse, a plump game bird, the pair came across a bald eagle caught in a hunter’s trap hidden in snow in Sudbury, Ontario, last week.

Although it wasn’t clear how the eagle became snared, the bird’s talon was firmly wedged in the trap, preventing it from escaping.

The brothers then carried out a heroic rescue and filmed the whole thing, presumably to ensure people believed them when they recounted their brave act.

In the video, they can be seen draping a jumper over the head of the bird to calm it and then using a stick to pry open the trap.

Neil told Canada’s CBC News they were hunting when they found the trapped animal.

“It was relieving to see that it was still alive. I knew we had to do something right away,” he said.

“At first the eagle was a bit nervous to have my brother and myself there, as soon as he realised we were trying to help he kind of calmed down a little bit. His head would kind of move back and forth to look at us, but that was the most he’d do.”

Once the bird was freed, they took the rare opportunity for a photo with the animal, before releasing it back into the wild.

Me and Neil found this eagle in a trap

Bald eagle we set free from a trap. Quick selfie before it flew away

“I knew this would never happen again, so before we let it go, I told my brother Michael, ‘we should take a picture with it’. The bird had its mouth open, but he never tried to fly or bite or do anything,” he said.

“It made it pretty easy [for us to] take a picture with it.”

Their efforts were celebrated by Sudbury Ornithological Society’s Chris Blomme, who said bald eagles are quite large predatory animals with sharp claws and beak.

“I think it’s really great the Michael and Neil took the gumption to actually try and deal with the bird … most people might be a bit hesitant to approach them,” he said.