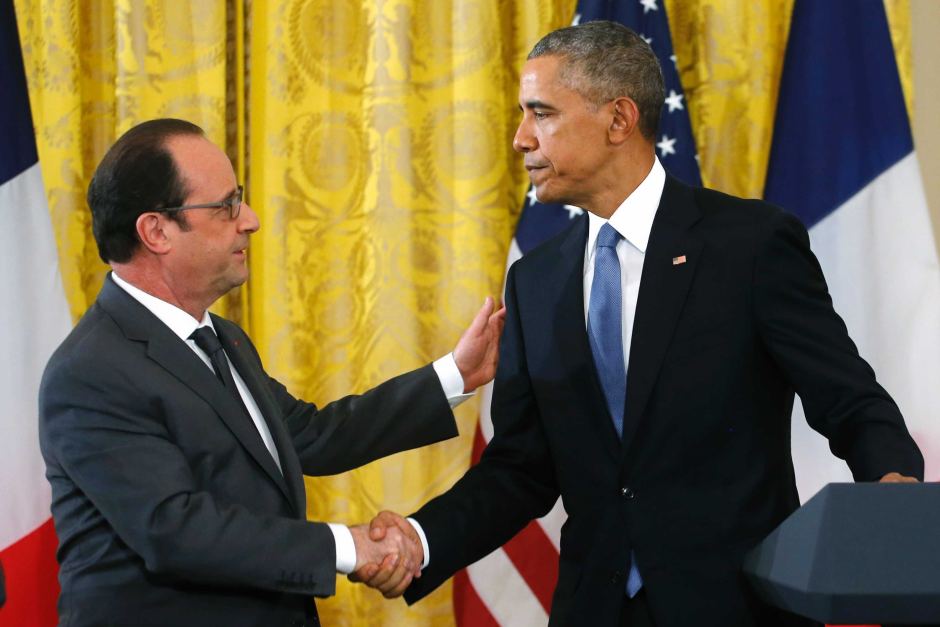 World leaders are urging calm after Turkish military shot down a Russian jet near the Turkey-Syria border on Tuesday.

Russian president Vladimir Putin called the incident a “stab in the back” and warned of “consequences”, claiming the plane was shot down one kilometre inside the Syrian border.

But leaders, including French president Francois Hollande and Barack Obama, together in Washington on Wednesday, advised against escalation and said the incident highlighted the weaknesses in Russia’s strategy against Syria.

Australian foreign minister Julie Bishop warned “clear and concise analysis” was needed before any action taken, as the facts were “still unclear”.

“We urge both sides to exercise restraint and that there not be any military retaliation,” Ms Bishop said.

“It does underscore the complexity of the situation in Syria and Iraq.”

Opposition leader Bill Shorten warned the airspace over Syria had become increasingly “crowded”, while Prime Minister Malcolm Turnbull said the government was paying close attention to the safety of Australian pilots in the area.

Mr Hollande and Mr Obama were scheduled to meet in Washington to discuss and announce their joint strategy against the Islamic State in Syria and Iraq following the terror attacks in Paris on November 13.

The French president said any moves against Syria should concentrate specifically on IS.

“We must find a solution to the Syrian crisis because we can see what the risks are otherwise, the risks of escalation,” he said.

NATO’s secretary general Jens Stoltenberg refuted Mr Putin’s claims the plane had been shot down inside of Syria’s border.

“We stand in solidarity with Turkey and support the territorial integrity of our NATO ally,” he said in a statement.