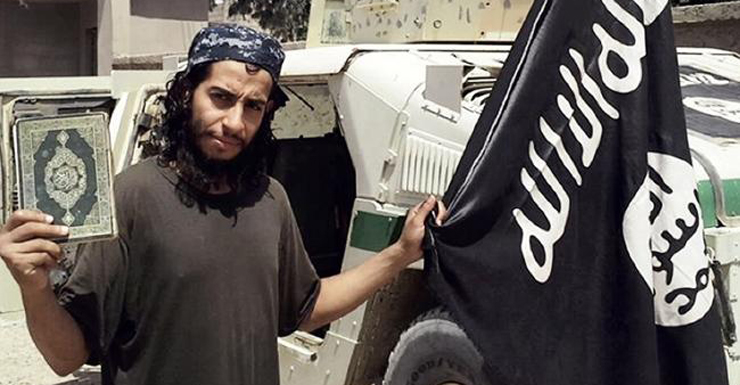 Black Friday in Paris, the worst terrorist attack in French history, is as calculated as it is cold-blooded.

At least eight assailants, armed with high-powered automatic rifles and wearing explosive suicide vests, methodically carry out a co-ordinated wave of violence across the city in three hours of horror.

The series of monstrous acts on Friday, November 13, begin with a suicide bomb blast outside Paris’ main soccer stadium. Drive-by shootings at several restaurants immediately follow, before the barbarism ends with a massacre of concert goers at a popular theatre.

With almost military-like precision, three teams of attackers slaughter 129 innocent people and wound at least another 350. Eight of the terrorists die.

At 9.20pm, a loud boom echoes around Stade de France on the northern outskirts of Paris during a friendly international match between France and Germany.

The stadium shakes under foot, the spirited singing of soccer fans is drowned out and even the players seem confounded by the blast.

The 80,000 spectators packing the stadium spontaneously cheer what they believe is the start of a fireworks display.

They are unaware that outside the stadium near Gate D on Rue Rimet lies the remains of a suicide bomber and an innocent passer-by, a 63-year-old Portuguese man working in Paris.

After being thwarted by a security guard as he tries to enter the stadium 15 minutes after kick-off, the terrorist detonates his explosive belt packed with bolts. A Syrian refugee’s passport is found near the his body, but its authenticity is yet to be confirmed.

At 9.30pm, another deafening boom reverberates around the stadium as a second suicide bomber, possibly a 15-year-old youth, blows himself up on Rue Rimet, near Gate H. The sound of the blast is greeted with more good-natured cheers by fans still oblivious to the carnage outside.

At 9.53pm, a third suicide bomber detonates his explosives on Rue de la Cokerie, just outside a McDonald’s restaurant and 300 metres from the stadium. Apart from the perpetrators, no one else is killed or injured in these two blasts.

Police believe the terrorists planned to trigger a human stampede by detonating explosives inside the stadium, leaving the fleeing fans to the mercy of suicide bombers waiting outside.

The match continues to run its course at Stade de France, resulting in a 2-0 win for the French team. Spectators gradually become aware of the unfolding horror via their mobile phones.

Among them is French President François Hollande who is watching the match along with German foreign minister Frank-Walter Steinmeier.

Soon after the first blast, an aide whispers into Hollande’s ear. The president is whisked away from the stadium to secure quarters in the Ministry of Interior where he convenes an emergency cabinet meeting.

When the referee blows the final whistle to end the match, the players are ushered into locked change rooms. The first signs of panic start to show among spectators as they are caught up in a logjam trying to leave by the few gates allowed open by security guards.

Frustrated and frightened, many of the spectators flood onto the pitch where they wait for the exits to clear. As the horrifying extent of Black Friday in Paris becomes apparent to them, defiant fans leave the stadium singing the French national anthem, La Marseillaise.

At 9.25pm, a rented black hatchback pulls up near the corner of Rue Alibert and Rue Bicha in Paris’ 10th District, about 11km from Stade de France.

At least two terrorists armed with Kalashnikov-style assault rifles step out and open fire without hesitation on diners at Le Carillon bar and restaurant. The semi-automatic weapons angrily spit out dozens of 7.62 mm calibre bullets, which are normally used in warfare. With shell casings falling at their feet, the gunmen then head across the street and fire on patrons at Le Petit Cambodge, a Vietnamese and Cambodian restaurant.

At first, diners think they are hearing fireworks, but when bullets smash through walls and windows, reality dawns and they dive for cover under tables and chairs.

At 9.32pm, gunmen with automatic rifles arrive in a black car at Rue de la Fontaine-au-Roi, just around the corner from Le Carillon and Le Petit Camboge restaurants.

One gunman, dressed in black military-style clothing, adopts the classic shooting stance and fires in bursts of three or four shots.

Several unaware diners are killed instantly as they sit at tables in front of La Casa Nostra.

Arriving in a black car, two gunmen callously target people dining al fresco on the footpath outside the eatery. Firing high-calibre bullets, they kill 19 people, including a plain clothes police officer, and seriously wound nine others.

One fortunate couple, earlier turned away by the fully-booked restaurant, listen in horror to the gunfire from another restaurant a few doors down the street.

At 9.40pm, a suicide bomber detonates his explosive vest inside Comptoir Voltaire restaurant on Boulevard Voltaire in the 11th District — less than 1km from La Belle Equipe bar.

The blast is similar to the suicide bombs used near Stade de France. Apart from the dead attacker, one person is seriously wounded while others suffer only minor injuries.

At 9.40pm, a black VW polo sedan parks outside the Bataclan theatre on Boulevard Voltaire in the 11th District, 2km away from Comptoir Voltaire restaurant. Seated inside are three terrorists dressed in black, armed with AK-47 assault rifles and wearing suicide bomb vests.

A capacity crowd of 1500 are about 45 minutes into a concert at the Bataclan by American rock band Eagles of Death Metal. In the street light, the terrorists emerge from their vehicle and stride purposefully through the theatre’s main entrance.

Once inside, they quickly choose their first target – a cluster of unsuspecting fans at the front of the stage, their backs turned to the gunmen.

The chilling sound of rapid and repeated automatic rifle fire rises above the music. People drop to the floor — some already dead, others gravely wounded. Those lucky enough to survive the first salvo cower in confusion, disbelief and fear.

The gunmen, who look to be in their 20s, reload their weapons up to four times. Shouts of “Allahu Akbar” (God is greatest) are heard amid the screams of their helpless victims.

Panic-stricken people scramble to escape through side doors and windows, while others search desperately for hiding places.

The shooting lasts up to 15 minutes. The theatre floor becomes a sea of bodies and blood.

Not content with this mayhem, the gunmen then begin to callously execute survivors, some as they lie helplessly on the floor.

As police arrive in increasing numbers outside the theatre, it becomes clear the terrorists are not interested in negotiation. Apart from references to “Syria” and “Iraq”, communications between the gunmen and police are brief.

Terrified concertgoers still inside the Bataclan issue desperate pleas for help on social media. Benjamin Cazenoves posts on Facebook that people are being killed “one by one”.

Given it’s clear the terrorists’ intention is to murder as many people as possible, special forces storm the theatre at 12.20pm using stun grenades and led by several elite officers hiding behind a special bullet-proof shield.

The terrorists, who by now have slaughtered 89 innocent people in the Bataclan and are still holding about 20 hostages, respond with gunfire, striking the police shield more than 25 times.

As the officers advance towards the terrorists, freed hostages are pulled behind the shield and ushered to safety.

The entire rescue operation takes less than five minutes, ending with two of the terrorists blowing themselves up and police shooting dead the third. None of the hostages are killed or wounded and only one officer is injured.

However, any feeling of relief is quickly swept aside by the painful realisation that Paris – “The City of Love” – has not endured violence on this scale since World War II. This is what really happened in Paris