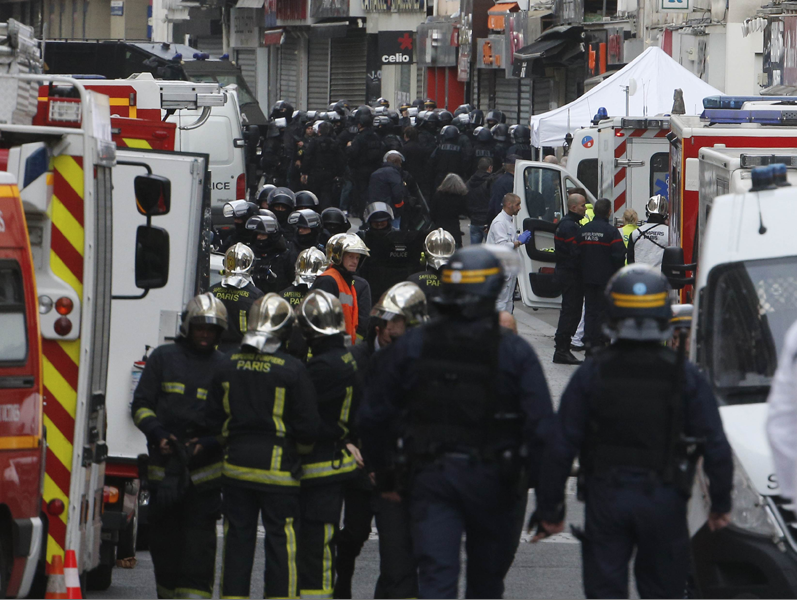 Six new raids are underway near the Belgian capital of Brussels, France’s chief prosecutor has confirmed, as France seeks to extend the state of emergency introduced after last week’s deadly attacks.

The raids are connected to a suicide bomber who blew himself up outside the Stade de France during the series of coordinated attacks that killed 129 people across Paris.

“They are linked to Bilal Hadfi,” the prosecutor told AFP news agency, adding the raids targeted places involving Hadfi’s family, friends and other people directly linked to him.

Investigators said Hadfi was a French national who was living in Belgium and had spent time in Syria.

“It’s a case which has already existed in 2015, following Mr Hadfi’s departure for Syria,” a source in the prosecutor’s office said.

Police also detained one person in a separate raid in Laeken, a suburb north-west of Brussels, in connection with the Paris attacks but not with Hadfi, the source added.

The person’s role in the attacks “remains to be seen,” the source said.

The raids come as the French government considers whether to extend the state of emergency introduced after the attacks.

French president Francois Hollande said police had put more than 100 people under house arrest and raided 168 premises in the wake of the attacks, and asked the parliament to extend the state of emergency by three months.

Police powers have also been bolstered to allow officers to carry weapons when they are off duty.

Police officers will also be allowed to use their guns in the event of a terror attack providing they wear a police armband to “avoid any confusion”, according to a police directive.

“This will allow off-duty police offers to be an additional force outside their hours,” police union official Jean-Marc Bailleul said on ITELE television.

In a speech to parliament about extending the state of emergency, prime minister Manuel Valls warned of the danger of an attack using “chemical or biological weapons”.

“We must not rule anything out. I say it with all the precautions needed. But we know and bear in mind that there is also a risk of chemical or bacteriological weapons,” Mr Valls said.

“The macabre imagination of the masterminds is limitless.”

“More than ever, it’s time for Europe to adopt the text… to guarantee the traceability of movements, including within the union,” he said

“It’s a condition of our collective security.

The Brussels raids followed Wednesday’s operation in Paris, where police stormed the apartment in the suburb of Saint-Denis in a hunt for Abdelhamid Abaaoud – a Belgian Islamist militant accused of planning last Friday’s attacks.

Officers fired 5000 rounds and a woman wearing a suicide vest blew herself up during the raid, which officials said foiled a jihadi plan to hit Paris’s business district.

Eight people were arrested and forensic scientists were working to confirm if two or three militants died in the violence.

“A new team of terrorists has been neutralised,” Paris prosecutor Francois Molins said, adding the apartment was left shredded by the assault, its windows blown out and the facade riddled with bullet impacts.

“This commando could have become operational,” Mr Molins said.

A source close to the investigation said the dead woman might have been Abaaoud’s cousin, while the Washington Post quoted senior intelligence officials as saying Abaaoud himself had died in the shoot-out.

Mr Molins said none of the bodies had been identified, adding only that Abaaoud was not amongst those detained.

He said a body that had fallen through the masonry was so riddled with bullets and shrapnel that it was impossible to carry out an identification.

Investigators believe the attacks – the worst terrorist atrocity in France since World War II – were set in motion in Syria, with Islamist cells in neighbouring Belgium organising the mayhem.

Two police sources and a source close to the investigation said the Saint-Denis cell was planning a fresh attack.

“This new team was planning an attack on La Defense,” one source said, referring to a high-rise neighbourhood on the outskirts of Paris that is home to top banks and businesses.

After the raid and resulting gunfight, white-suited forensic experts swarmed the building as police tried to verify if Abaaoud was in the apartment.

Local residents spoke of their fear and panic as the shooting started just before 4:30am (local time).

“We could see bullets flying and laser beams out of the window. There were explosions. You could feel the whole building shake,” Sabrine, downstairs neighbour from the apartment that was raided, said.

She told Europe 1 radio she heard the people above her talking to each other, running around and reloading their guns.

Five police officers and a passerby were injured in the assault. A police dog was also killed.