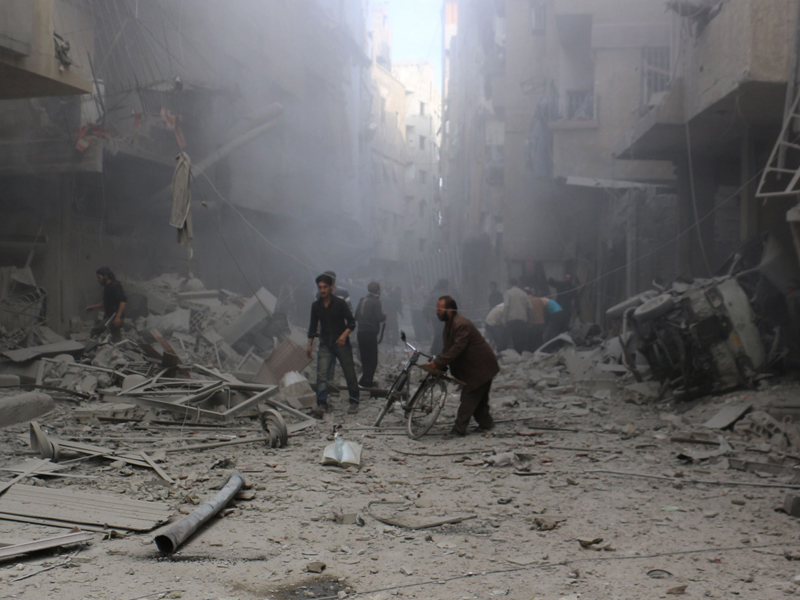 Airstrikes are ramping up against Islamic State after last week’s attacks in Paris and Beirut, but there is plenty of debate about whether military action by the West will do more harm than good.

French President Francois Hollande’s promise to wage a “pitiless war” in the wake of the terror attacks that left 129 people dead has seen the European military power swiftly strike numerous targets within areas of Syria controlled by Islamic State, which claimed responsibility for the attacks.

Russia has also escalated its bombing raids against Islamic State after confirming that a bomb attack brought down a passenger over Egypt last month, killing all 224 people on board.

• Alleged Paris attack leader reportedly dead
• Did the Grand Mufti get it wrong?
• What the Paris attacks mean for the world

Other countries have promised to increase efforts against the self-proclaimed caliphate, although Prime Minister Malcolm Turnbull has not committed to escalating Australia’s existing air combat role and has advocated for a political solution to the Syrian conflict.

Speaking at the Asia-Pacific Cooperation Summit in the Philippines, Mr Turnbull said the nature of the grievances that fuel terrorism need to be acknowledged.

“The approach of all the parties to a resolution in Syria has to be one undertaken in a spirit of compromise and in a spirit of pragmatism,” he said.

The more we kill, the more arise

Which side is right? According to Curtin University national security expert Dr Alexey Muraviev, both make a good point.

He told The New Daily that while some people become radicalised purely by the ideology of Islamic State and similar organisations, others become sympathetic to such causes because of Western military action.

“If your relatives are killed by a foreign invasion force, your house destroyed, your friends suffering, or maybe you are a patriot looking at your country reduced to rubble, it can trigger a reaction by some to resort to arms,” he said.

He said victims of Western bombing attacks could react in any number of ways, from joining IS or Al Qaeda, to starting their own militia or simply refusing to help.

“It might be passive resistance, indirect support to terrorist groups – maybe they know where they are hiding, but won’t tell the [western military] ‘because they’ve murdered my family’,” he said.

Dr Muraviev said the death of innocents was difficult to avoid in airstrikes in the region because military targets are usually located close to or within civilians settlements – sometimes deliberately.

“Terrorists often use civilians as human shields,” he said.

“ISIS has a practice of putting captured civilians and POWs into cages and leaving them near targets as human shields, or positioning military vehicles near mosques and other civilian infrastructure.

“They don’t care if we destroy infrastructure on the ground like roads, they don’t have a sense of ownership – they are a doomsday cult.”

But war may be unavoidable

Nevertheless, Dr Muraviev said bombings play an important part in weakening the enemy’s economic potential, and that tough decisions need to be made to defeat Islamic State.

“There is no other option but to destroy ISIS physically. Any suggestion you can reason with these people would be kidding ourselves,” he said.

“You can’t fight war in white gloves, but what you can do is minimise collateral damage by using credible intelligence and effective cooperation [with others fighting Islamic State].”

Murdoch University counterterrorism expert Professor Sam Makinda said airstrikes alone could not win a fight against Islamic State, but argued that they were an important tool.

He told The New Daily that bombings should not be seen as a significant recruitment tool for Islamic State.

“ISIS started recruiting before any airstrikes against them, the reasons for recruiting have not gone away,” he said.

“I think they recruit more because they have the capacity to convince youngsters they can do something good for Islam and that kind of thing.”