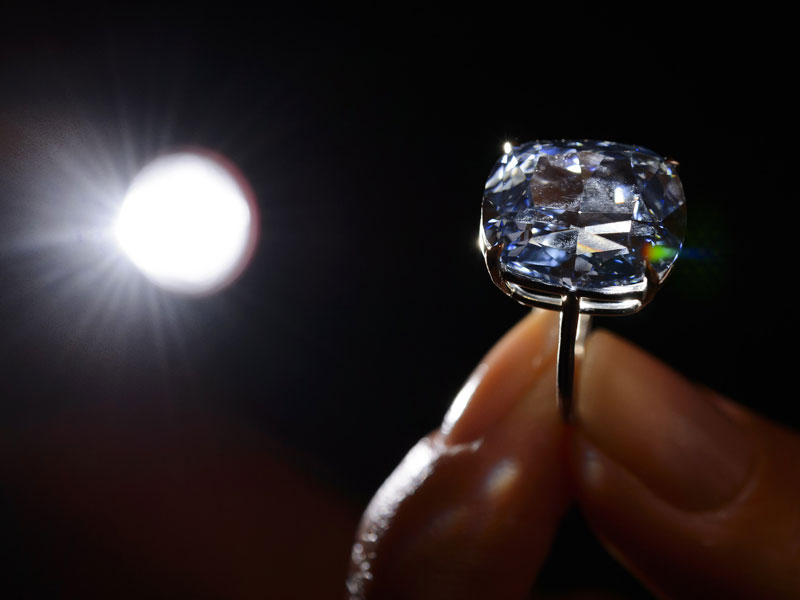 A Hong Kong billionaire has spent a record $US48.4 million ($67.8 million) buying a 12.03-carat diamond dubbed “Blue Moon” for his seven-year-old daughter at an auction in Geneva.

Property tycoon Joseph Lau, who was last year found guilty of bribery in neighbouring Macau, bought the rock at a Sotheby’s auction and immediately renamed it “The Blue Moon of Josephine” after his daughter.

The sale comes the day after he spent $US28.5 million at rival auction house Christie’s to buy a rare 16.08-carat pink diamond – the largest of its kind to ever go under the hammer – which he renamed “Sweet Josephine”.

A Hong Kong-based spokeswoman for Mr Lau confirmed the two purchases to AFP.

“The first was the pink one ‘Sweet Josephine’ and the second one was the ‘Blue Moon of Josephine’,” she said.

Head of Sotheby’s international jewellery division David Bennett said the Blue Moon sale broke several records – making the gemstone “the most expensive diamond, regardless of colour, and the most expensive jewel ever sold at auction”.

It also fetched the highest-ever price per carat, he said, with the buyer shelling out 4.02 million Swiss francs per carat.

The previous world record for a jewel sold at auction was held by the 24.78-carat “Graff Pink” diamond, which was sold by Southeby’s for $US46.2 million in November 2010.

This is not the first time Mr Lau has bought rare jewels for his daughter.

In 2009, he reportedly spent $US9.5 million on another blue diamond, which he renamed the “Star of Josephine”.

Josephine is his daughter with girlfriend and former aid Chan Hoi-wan, according to local media.

In March last year, he was found guilty of bribing a former minister in the gambling enclave of Macau in an attempt to purchase a prime development site.

Mr Lau, who was not in Macau for the sentencing, is unlikely serve time as the two semi-autonomous Chinese cities do not have an extradition agreement.

He was locked in a telephone bidding war for eight minutes for Blue Moon before the hammer went down, with the precious jewel staying within its pre-sale estimate of $US35-55 million.

The diamond was discovered in South Africa in January last year and was the largest cushion-shaped blue stone in the fancy vivid category to ever appear at auction.

Experts say the market for coloured diamonds has grown increasingly robust and both the blue and pink diamonds garnered a lot of attention in the run up to this week’s jewel sales in Geneva.