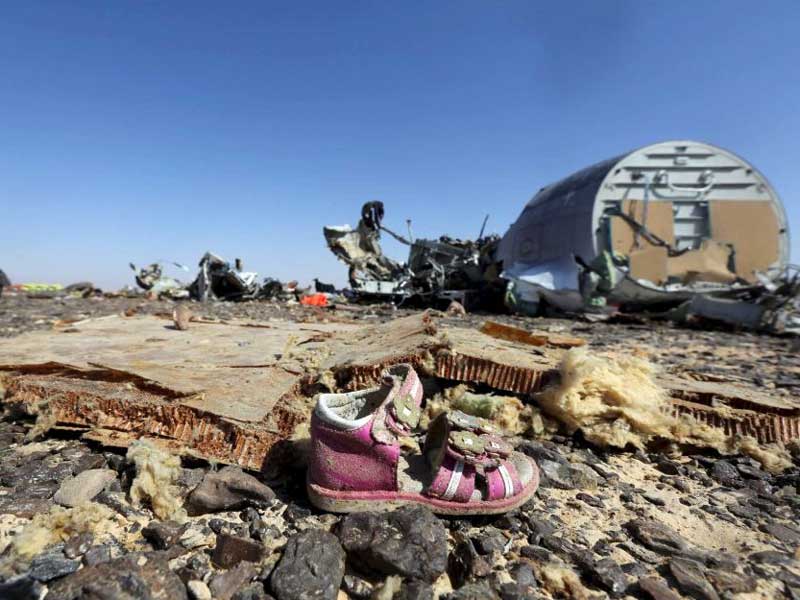 A Russian airliner that crashed in Egypt’s Sinai peninsula broke up mid-air, aviation officials have said.

All 224 people on-board were killed when the plane came down en route from Sharm el-Sheikh in Egypt to Saint Petersburg, Russia, early on Saturday morning.

• Al-Shabaab attack kills 15 in Mogadishu
• IS says ‘we shot jet down’, but doubts emerge
• Islamic State claims it downed plane

“Parts of the aircraft have been dispersed across an elongated strip of about eight kilometres by four. All the signs are that the aircraft disintegrated at a high altitude.”

If the A321 passenger jet broke up at high altitude, possible explanations would include an on-board bomb or accidental malfunction – but probably not a surface-to-air missile.

The terrorist groups was not believed to have missiles capable of hitting a plane at cruising altitude (30,000 feet).

Russian officials said they needed to comb through an area of about 16 square kilometres in the Sinai Peninsula.

Investigators recovered the plane’s black box flight recorder and the Egyptian government said its contents were being analysed.

“In such cases, leave it to specialists to determine the cause of the plane crash because it is a subject of an extensive and complicated technical study,” Mr al-Sisi said.

The plane – flown by Kogalymavia airline, but operating under the name Metrojet – was less than half-an-hour into its flight.

The crash site in the Wadi al-Zolomat area of North Sinai was reportedly littered with blackened parts of the plane, as the smell of burnt metal lingered in the air.

There were no bodies visible but soldiers guarded dozen of bags as well as black, red and orange suitcases of passengers from flight KGL 9268.

The Kogalymavia airline defended its pilot, Valery Nemov, who it said had more than 12,000 hours of flying experience, including 3860 hours on an Airbus A321.