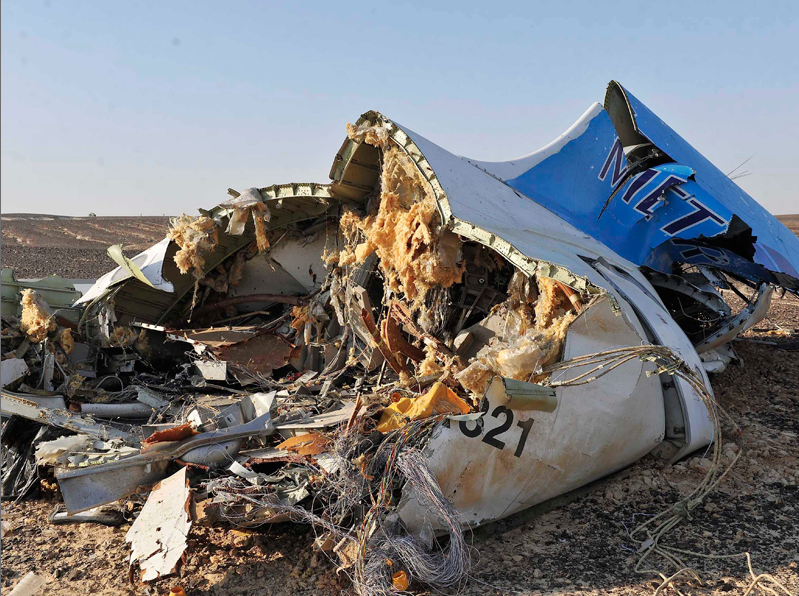 As families of the 224 people who died after a commercial airliner crashed in Egypt were learning of the tragedy, Islamic State released a video allegedly claiming it was responsible for the disaster.

News of the tragedy broke on Saturday (AEDT) with reports a Russian passenger jet – an Airbus A321 – had crashed en route from Sharm el-Sheikh in Egypt to Saint Petersburg, Russia.

“Experts have affirmed that technically planes at this altitude cannot be shot down, and the black box will be the one that will reveal the reasons for the crash,” Mr Ismail was quoted by state news agency MENA as saying.

Experts have not ruled out a bomb on board or the possibility that the plane was hit by a rocket as it descended because of technical problems. The pilot had more than 12,000 hours of flight experience.

“Communications between the pilot and the tower were very normal – no distress signals occurred,” said Egyptian transportation minister Hossam Kamal.

“All was normal; the plane disappeared suddenly off the radar without any prior warning.”

The unverified statement said the crash was not a technical fault, as previously reported.

“The fighters of the Islamic State were able to down a Russian plane over Sinai province that was carrying over 220 Russian crusaders,” the IS statement read. “They were all killed, thanks be to God.”

Moscow said it was sceptical of the claims and that it was examining the aircraft’s black box for the cause.

Later, IS posted video to social media which it alleged proved an IS missile was responsible for the attack (WARNING: some readers may find this video disturbing).

It appears to show an aircraft exploding in the air and then falling from the sky.

The plane was carrying 200 adult passengers, 17 children and seven crew. The passengers on board included 214 Russians and three Ukrainians, the Egyptian government said in a statement.

IS has carried out a series of deadly attacks throughout Egypt over the past two years.

Following the disaster, Air France and Lufthansa announced they would stop flying over Egypt’s Sinai Peninsula.

Lufthansa said it would not fly over the area while “the cause for the crash has not been clarified”.

It is understood British Airways pilots have been told not to fly too low over the area.

The maximum altitude a surface-to-air missile can strike is around 25,000 feet. Military experts told news agency AFP that IS militants in Sinai do not have weapons capable of hitting an aircraft at 30,000 feet (9000 metres), the altitude of the airliner when it lost contact.

The Daily Mail also reported A3’Maq News – a group linked to IS – used the headline: “Fighters of the Islamic State down a Russian passenger plane in the sky over the Egyptian Sinai”, in a post about the crash.

The post quoted a source saying: “This operation came in response to raids by Russian planes that have caused the deaths of hundreds of Muslims on Syrian territory, most of them women and children.”

Russia launched air raids across Syria against IS targets in early October.

Mr Putin has been a long-time supporter of the Assad regime in Syria, which is locked in a war for the country’s control with IS.

The US has been sceptical about Russia in Syria since Mr Putin’s bombing efforts began. The US is opposed to the Assad regime and reportedly sees Russia’s support for Assad as harmful in the fight to defeat IS.

In October, airlines, including Qantas, were warned about flying over the Caspian Sea, which hosts Russian ships which are launching missiles into Syria.

If IS was to be confirmed as the perpetrator of the attack, it would be its mostly deadly on record.

The highest death toll from an IS attack in 2015 is 41, when a suicide bomber allegedly hit an Iraqi police station in Randi.

The previous highest death toll for a suspected IS attack is 83, after a simultaneous wave of bombings in 14 Iraqi cities on February 23, 2012. Matildas will be keen to forget 7-0 drubbing by Spain
Upcoming stats will reveal where and how hard rates are hitting economy
Victorian MPs pocket a tidy 2.75 per cent pay raise
Reserve Bank review isn’t a ‘get the governor’ exercise: Jim Chalmers
‘Violence for weeks’ feared after landmark US abortion ruling
Aussie Hannah Green within striking distance of Women’s PGA Championship lead
Quirky pop-up markets are a thing at Polish cemeteries
Today's Stories

IS says ‘we shot jet down’, but doubts emerge