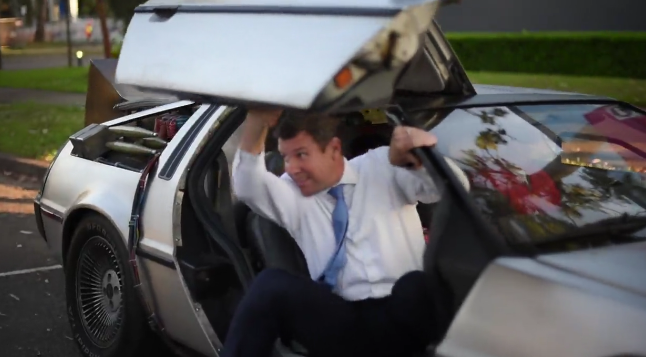 NSW Premier Mike Baird has taken his social media savviness to a new level to celebrate Back To The Future Day.

On Wednesday morning, Mr Baird posted a video to Twitter showing him arriving to work in a DeLorean, the famous vehicle that Marty McFly used to time hop during the Back To The Future series.

Back To The Future Day celebrates the day in Back To The Future II, when Marty McFly travels forward to October 21 2015, to save his children. Back To The Future II was set in 1985, so keen fans around the world are pulling special stunts to commemorate the occasion. For example, the Ford Prodrive Pepsi Max V8 Supercar team created a video to pay tribute to Robert Zemeckis’ film. Drivers Chaz Mostert, Mark Winterbottom and team manager Tim Edwards pay tribute to the series in the recreation. They will also race this week on the Gold Coast in a car similarly adorned to the DeLorean. Last week, a video was also released of Michael J Fox (Marty McFly) and Christopher Lloyd (Doc Brown), getting together in the present day to discuss what they movie predicted correctly. Let’s just say it didn’t have a very accurate strike rate. The full chat will be released on October 21 2015 (USA time), but below is a very amusing and nostalgic sneak peak. For those playing at home, that will be 4:30pm AEDT. Social media has predictably reacted in a frenzy to the day being commemorated. The predictions made in the film have been discussed particularly heavily. However this vine took a much more serious slant on how things have materialised since the film was released.

But, while the world does not yet have flying cars, self-adjusting clothes or food dehydrated into small forms and then expanded.

But, some predictions were kind of correct.

Newspapers still exist, like the USA Today did when McFly and Doc went to the future, and we have video calling.

We also have technological wearables like Google Glass and virtual reality and we do have literally hundreds of television channels with not much on.

And don’t forget the MLB baseball team the Chicago Cubs. Back To The Future II predicted they would win the World Series in 2015.

They’re currently in the semi-finals and being tipped to go all the way. It would be their first World Series since 1908.

But there is one piece of technology that the child in all of us yearns for, and that is the famous hoverboard.

Unfortunately while prototypes exist, we still can’t go down to our local shops and buy one of the flying skateboards.

Mike Baird goes Back to the Future in DeLorean