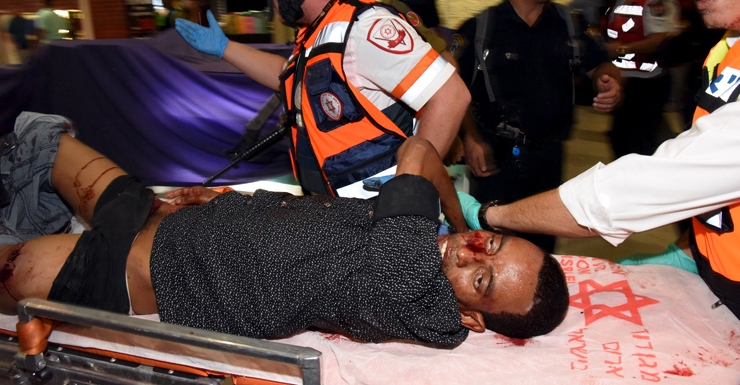 Prime Minister Benjamin Netanyahu has warned Israelis against vigilantism after an Arab Israeli unconnected to terrorism was shot and beaten to death by a mob.

On Monday, a man armed with a gun and a knife attacked a bus station in the southern Israeli city of Beersheba, killing a soldier and wounding 10 others.

A security guard killed the attacker, but mistook an African bystander as a threat, shooting him also. “Just because of his skin colour,” Israeli newspaper Yedioth Ahronoth declared in a headline.

While still alive, the innocent man was kicked, cursed at and spat upon by a crowd of Israelis, eyewitness footage viewed by The New Daily appears to show.

A row of chairs were dropped on the man’s body as he lay caged beneath the metal legs of a single chair. An armed Israeli soldier attempted to push away the attackers.

Shouts in Hebrew from the crowd were interpreted by African news website Ethioscope as “terrorist”, “kill him”, “break his head” and “son of a prostitute”.

“We are a law-abiding country. No one must take the law into their own hands,” Prime Minister Netanyahu said on Tuesday in response to the vigilantism.

Police identified the victim as Habtom Zarhum, with Israeli media describing him as an illegal asylum seeker from the nation of Eritrea. His age was reported as 26 and 29.

Local police claim to have opened a criminal investigation into those involved in the lynching.

October has marked a month of violence in Israel, with multiple lone wolf-style attacks perpetrated by Palestinians on Israelis, with fears of a full-scale ‘intifada’ or guerrilla war.

Possible causes of the violence are years of Israeli oppression, the spread of Islamic State propaganda and a fear amongst Palestinians that the Israeli government will further restrict Arab visits to the Al-Aqsa mosque, the third holiest site in Islam, which is known to Jews as the Temple Mount.