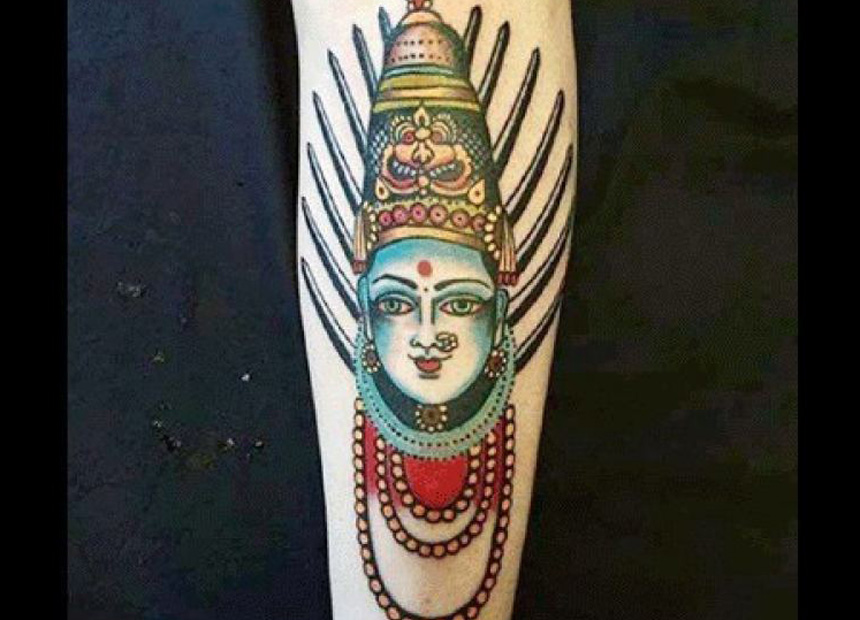 An Australian man and his girlfriend have been harassed by a group of angry men in India because they were offended by the man’s Hindu tattoo.

According to local newspaper The Hindu, the men even suggested the Australian’s leg be skinned to remove a tattoo of the goddess Yellamma.

The Australian couple were then detained by Bengaluru city police and forced to write a letter of apology to the men for “hurting their religious sentiments”.

The incident happened Monday (AEDT), when Matthew Gordon, 21 and his girlfriend Emily Kassianou, 20, from Melbourne were seen by the group.

“One of them came to me and confronted me about my tattoo. Soon, they surrounded us and threatened to skin my leg and remove the tattoo,” Mr Gordon told The Hindu.

“A policeman arrived and said this is India and one couldn’t sport such a tattoo on the leg.”

He said more than 25 men surround him and his girlfriend and they did not let them leave. Footage captured by Ms Kassianou showed the ring around the pair.

The men were beleived to be activists from the ruling Hindu nationalist Bharatiya Janata Party.

The couple and their local friend Abishek were then taken to the Ashok Nagar police station.

According to the trio, they were given a “dressing down” and lecture on Hindu values in front of the group.

“Policemen forced Matthew to write an apology and we were made to wait for three hours till he did so,” Ms Kassianou said.

Mr Gordon added: “The policemen advised me on Hindu religion and insisted I give a written apology for not covering my goddess tattoo, even as the group just watched.

“I tried taking law points, but had to finally give in as my girlfriend was in tears as the cops wouldn’t let us go.”

Deputy Commissioner of Police in the area Sandeep Patil, told The Hindu that matter was “trivial”.

“Both parties have reached a compromise and there is nothing serious about it,” he said.

Australia’s High Commission told the ABC it was concerned about the incident and was speaking to local authorities.

Watch video of the ordeal below and read Mr Gordon’s apology letter:

My forced letter of apology that I had to write before I could leave the police station at Ashok Nagar. I should not…