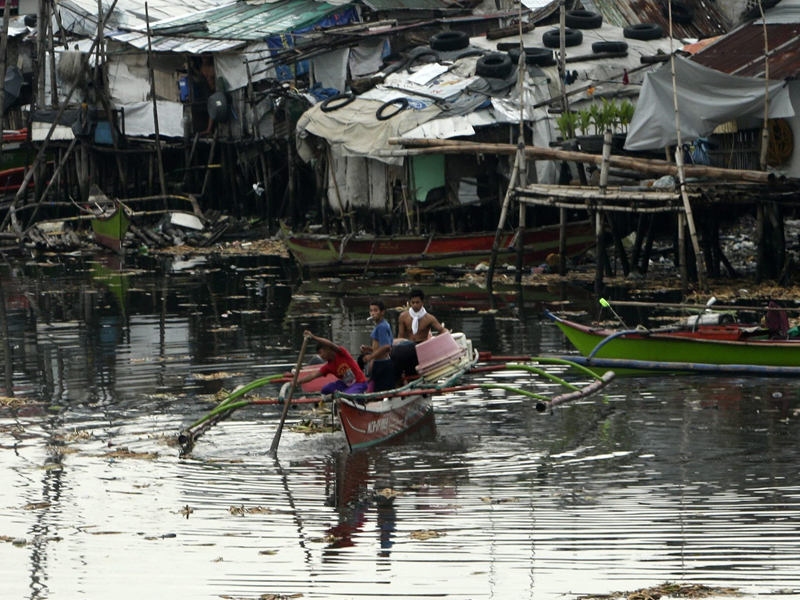 The category-four typhoon made landfall around 1:00am (4:00am AEDT) near the town of Casiguran in Aurora province, where it remained near-stationary for seven hours and whipped the area with gusts of up to 210 kilometres per hour.

It is believed one teenage man has died, after being crushed as the powerful typhoon tore down trees and houses.

At least eight people have been reported missing and rescue operations are underway in the rice-farming province of Nueva Ecija where rivers burst their banks and flooded several villages, regional authorities said.

“People are asking for help because the floodwaters are rising. The rescuers cannot penetrate the area as of now,” Nigel Lontoc, the assistant civil defence chief for the region, said.

“Some villages are no longer accessible … I was told that rescuers saw two human bodies floating in the water,” Mr Umali said.

Mr Lontoc said the bodies had not been recovered.

Disaster management officials warned of three days of floods, tsunami-like storm surges and landslides as the typhoon slowly makes its way across the island.

“I must emphasise that this is just the start. People must remain alert while we try to pick up the pieces in areas already hit,” said Alexander Pama, executive director of National Disaster Risk Reduction and Management Council.

“Initially, we are getting many houses were destroyed, power lines toppled and trees blocking major roads.”

Civil defence officials said waves as high as 14 metres could occur at sea and banned vessels from sailing in over half the country.

“Koppu tore off roofs of homes made of light materials. Rivers overflowed, and the roads to the area are blocked by downed power pylons and trees,” Mr Lontoc said.

Domestic flights were also cancelled and thousands of people living in coastal areas were evacuated to safer ground.

Videos posted to social media showed the power of the flooding and the rescue efforts that took place in the horror conditions.

Koppu, possibly the second most powerful storm to strike the disaster-prone country this year, is not expected to leave the archipelago until Tuesday.

Weather station director Espie Cayanan warned that due to its interaction with the nearby Typhoon Champi, Koppu might move slowly across the northern end of Luzon.

Philippines authorities have warned that Koppu will likely bring up to 600 millimetres of prolonged rain.

Authorities cancelled flights and urged residents and tourists to move to safer ground as it approached north-eastern parts of the main island of Luzon.

Aid agencies from Australia, including Care and Oxfam, said they were on standby if help was needed.

Oxfam Australia chief executive Helen Szoke said the number one priority in responding to the disaster was determining the impact of the storm, and which areas had been hit hardest.

“Our rapid assessment teams are ready to deploy if needed to survey the scale of the damage and respond to immediate needs,” Dr Szoke said.

Dr Szoke, who was in the Philippines for the Typhoon Haiyan response, said Oxfam had contingency stocks in place, ready to be distributed to those in need.

“Oxfam has vehicles on standby and stocks including bladder tanks to provide clean water ready to deploy.” Dr Szoke said.

Ms Cayanan said the typhoon was expected to curve north and eventually move out to sea.

Although the storm will not directly hit the capital, Manila, Ms Cayanan said that its diameter was so huge that even the southern regions were likely to be affected by strong winds and rain.

Civil defence officials also warned of possible floods in river basins and urged residents to heed orders to evacuate ahead of any incident.

“If you are told you need to evacuate, then we appeal to you to evacuate,” Mr Pama said earlier.

He also urged the public to cancel any travel plans over the weekend.

Philippines president Benigno Aquino previously warned that Koppu could be uniquely destructive because it would bring intense rain over a long period of time.

On Friday, he appealed on television to people not to panic and to make preparations.

The last time Mr Aquino made a televised appeal was in 2013, the day before Super Typhoon Haiyan struck the central Philippines, killing more than 6300 people and leaving millions homeless.