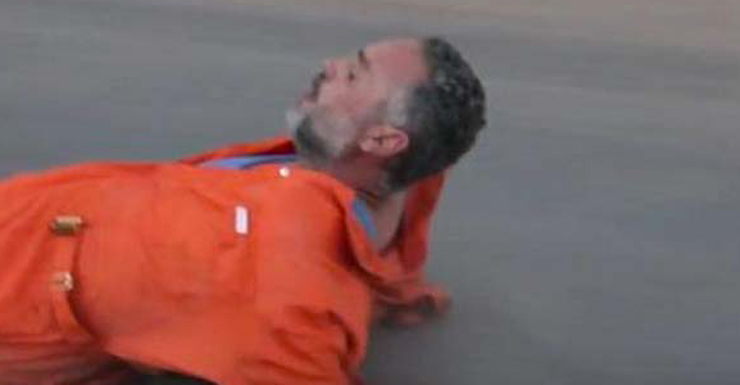 Islamic State has released a video of a man being dragged to death behind a ute, according to reports.

Posted to social media but since removed, the footage shows a grey-bearded man dragged along the road, attached to the ute by a rope.

According to the video, the man is Rushdi Ageela Omran Al-Masouri, 43.

In the footage he allegedly confessed to spying for the Derna Mujahadeen Shoura Council – a group of pro-Sharia law Islamist militia opposed to IS.

The Libya Herald reported the footage was captured in the Libyan city of Derna, but it is unclear when the execution too place.

Mr Al-Masouri is dressed in an orange jumpsuit, a familiar element in IS’s series of graphic execution videos.

It was reported he looked “unusually calm” while confessing.

The same video showed the execution of another man, who allegedly confessed to storing weapons in the city, for the same militia group.

He was reportedly killed by a shotgun wound before falling into a grave he’d been seen digging in the video.

According to the same report, two men were crucified by IS in the Libyan city of Sirte.