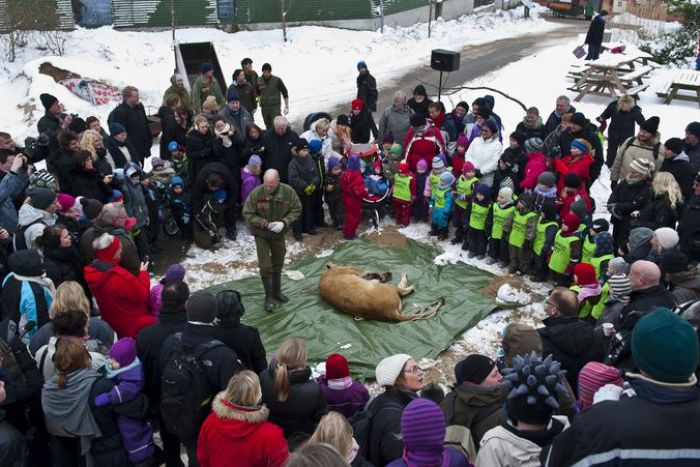 A lion in a Danish zoo has been euthanised and dissected in front of a crowd including children.

Zoo keepers in Odense, Denmark, killed the lion to prevent inbreeding in February, and kept it frozen so they could dissect it for educational purposes during the school holidays.

Pictures show a crowd of blonde Danish children witnessing the dissection, many with looks of disgust on their faces.

“Some kids thought it was too much, and so they left”, Nina Collatz Christensen, director of animals at the zoo told the New York Times.

However, Ms Christensen said for the most part the children were very interested in the demonstration, moving to the front of the crowd for a prime viewing spot.

“We have been doing this for 20 years, and our experience is that the children are curious, ask questions and are not afraid,” she said.

“Some people get caught up in emotions rather than think about the science.

“But if you eat a pig or cow for dinner, you have to kill it. Because it’s a cute lion, people overreact.”

According to zoo staff, the lioness was euthanised as the only available enclosure for her was already housing her Father.

In order to prevent inbreeding, the zoo said euthanisation was taken up as a last resort for maintaining a healthy population.

Some zoos in the USA employ contraception to combat the same problem, however Danish zoos put more value in allowing the animals to mate naturally.

In 2014, a separate zoo in Denmark received death threats after it euthanised a healthy two-year old giraffe because its genetics were already well represented in the zoo’s population.

Despite numerous petitions and condemnation from animal rights groups, the zoo decided not to re-home the giraffe to another zoo, arguing it would open the door to inbreeding.

However, biologist Ms Christensen Danes were surprised by the backlash, as a nation of pragmatic thinkers.

The move was supported by The European Association of Zoos and Aquaria based in Amsterdam, which cautioned that the moral outrage “would not serve to protect endangered species — and may even hinder educators and conservationists in their mission to do so.”