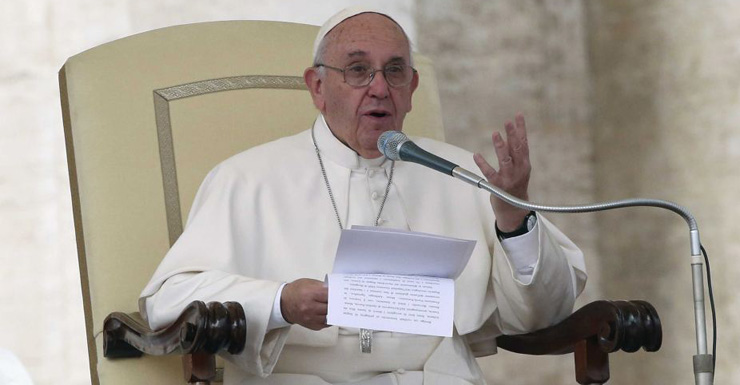 Pope Francis has asked for forgiveness for recent scandals at the Vatican and Rome — an apparent reference to two cases of priests and gay sex revealed this month during a major meeting of bishops.

“Today … In the name of the Church, I ask you for forgiveness for the scandals that have occurred recently, either in Rome or in the Vatican,” Pope Francis said in unprepared remarks during his weekly general audience in St. Peter’s Square.

“I ask you for forgiveness,” he said before tens of thousands of people, who broke into applause.

The Pope then read his prepared address and did not elaborate, but there have been two scandals involving the Vatican and the Church in Rome in the past two weeks.

On October 3, a Polish monsignor working in the Vatican’s doctrinal office since 2003 held a packed news conference in which he disclosed that he was gay and had been living with another man for years.

The Vatican dismissed Monsignor Krzysztof Charamsa, a theologian, from his job there as well as from teaching assignments in pontifical universities in Rome.

A spokesman said at the time that Monsignor Charamsa’s high-profile coming out on the eve of a meeting of world bishops at the Vatican was “grave and irresponsible”.

It accused him of trying to exert “undue media pressure” on the bishops’ debate on family issues, including the Church’s position on gays.

After he was fired, Monsignor Charamsa gave interviews to Spanish and Italian media in which he criticised the Church’s rule on celibacy for the clergy.

The Pope also appeared to be referring to a scandal exposed in the Italian media last week about an order of priests who run a parish in a well-to-do neighbourhood in Rome.

Parishioners in the Santa Teresa d’Avila parish wrote to local Church officials, alleging that a clergyman there had encounters with “vulnerable adults”.

According to the letter published in the media, parishioners said they had assembled evidence about the clergyman’s illicit activities and were furious to discover he had been transferred to another part of Italy instead of being disciplined.

Since his election in 2013, the Pope has asked forgiveness for sexual abuse of the children by the clergy and for the Church’s treatment of Protestants and indigenous people in the course of its history.