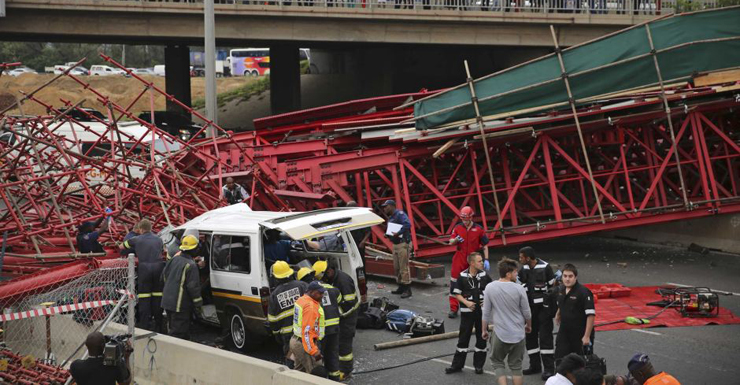 Two people have been killed and 20 injured after scaffolding for a bridge collapsed over Johannesburg’s main motorway.

“Murray & Roberts can confirm that this afternoon, a support structure that was erected to enable the construction of a pedestrian bridge … collapsed,” the firm said in a statement.

“The exact cause of the incident is not known at this time.

“All of our incident response procedures have been initiated, our support services have been mobilised and relevant authorities have been advised.”

Chris Botha, a spokesman for Netcare 911, a privately-owned emergency services company, said at least five of the injured were in a critical condition and that people were still believed to be trapped beneath the structure.

The tangled wreckage of the metal, red-coloured structure was sprawled across Johannesburg’s M1 highway near a busy off-ramp leading to the Sandton financial district where the stock exchange is located, bringing rush-hour traffic to a halt.

A witness said paramedics on the scene had worked to free people from a mini-bus taxi that had been smashed up by the collapse.

The share price of construction group Murray & Roberts, the contractor behind the project, tumbled more than 7 per cent in late trade after news of the tragedy broke.

Martin Lentsoane, the managing director of Lehumo Capital, a financial consultancy, said that shares in the construction sector had been under pressure but the accident contributed to the sharp drop in Murray & Roberts stock.

“The news around the company would be negative after the accident, and this contributed to the fall in the shares,” he said.

“There are questions on how the bridge was constructed, there could be lawsuits, regulators will be investigating, all these could be more bad news.”