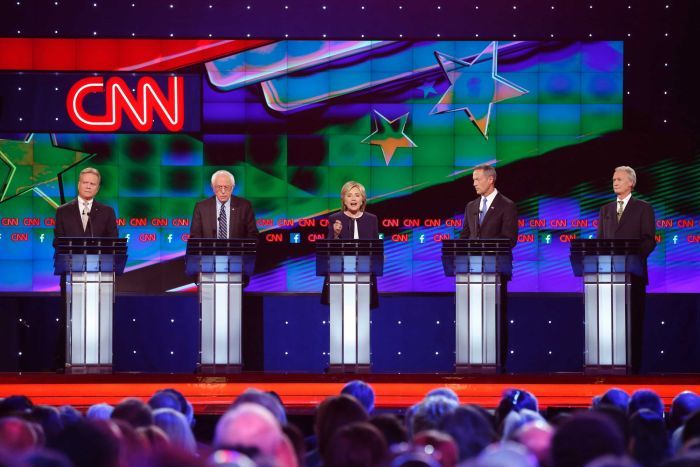 In American politics, they’re calling it the year of the outsider.

The 2016 presidential election was all supposed to be straightforward enough – a showdown between establishment favourites Hillary Clinton and Jeb Bush, both backed by eye-watering amounts of corporate funding and familiar family names.

Yet, already on the Republican side – two debates in – it has become clear the third Bush to run for the US presidency is no guarantee to get past the nomination phase, with former President George W Bush’s brother currently languishing in the polls behind reality TV star and property mogul Donald Trump and populist neurosurgeon Ben Carson.

Now it is Mrs Clinton’s turn, with the former secretary of state on Wednesday (AEDT) facing off against four other challengers for the first Democratic Party debate.

For years Mrs Clinton’s candidacy has carried an air of inevitability – but the same was said about her in 2008, only for an unknown candidate to dominate the debates and go on to win both the nomination and the presidency, a certain Barack Hussain Obama.

So, is there a wildcard candidate who could pull the rug out from under Mrs Clinton once again, and go on to become the next commander-in-chief of the United States?

We take a look at the contenders, along with their answer to a question from the Democratic debate on the enemy they are most proud of making. The biggest challenger to come Mrs Clinton’s way so far is Bernie Sanders, the fiery 74-year old senator from Vermont.

With his messy wisps of white hair and hoarse voice, Mr Sanders doesn’t quite fit the typical presidential mould, but then he has always gone his own way, constituently one of the most prominent critics of big business influence in politics.

Mr Sanders proudly describes himself as a democratic socialist – the latter a dirty word in American politics, as noted by late-night talk show host Stephen Colbert when he recently asked Mr Sanders: “Why can’t you accept ‘socialist’ as the insult it is meant to be?”

Passionately railing against income inequality and promising to deliver free college education and better healthcare, Mr Sanders has been attracting crowds of tens of thousands to his speeches around the country, surging to second place in the polls and even overtaking Mrs Clinton in some areas.

He had a strong debate performance, but was hit hard over his history of voting against gun law reform – a topical issue in the US given the epidemic of mass shootings across the country.

Enemy he is most proud of:
Wall Street and pharmaceutical companies Running in third place in the polls, Martin O’Malley is the former governor of Maryland, where he oversaw a progressive regime that counted the legalisation of same-sex marriage and repeal of the death penalty among its achievements.

More controversial was his stint as Mayor of Baltimore, where he failed to substantially reduce crime in one of America’s most violent cities, an issue that was raised during the debate.

Mr O’Malley has enjoyed a successful political career, but less fruitful was his time in music as the frontman of Celtic rock outfit O’Malley’s March.

Enemy he is most proud of:
The NRA The gap between the two major parties in the US seems impossibly large at times, but Mr Chafee has managed to bridge it.

The son of a Republican senator, Mr Chafee started out as a Republican politician himself, taking his father’s seat in the senate and becoming known as the most progressive Republican in Washington – voting against the Iraq War, opposing the death penalty and adopting a pro-choice stance on abortion, and backing same-sex marriage and action on climate change. He left office in 2007 and left the Republican party that year as well, supporting Barack Obama’s presidential campaign the next year and officially joining the Democratic party in 2013.

He was mostly sidelined in the debate, his most notable moment being one of a negative nature – debate moderator Anderson Cooper asked him about his controversial vote to repeal banking regulation laws in 1999. Mr Chafee said he was new to the senate and didn’t know what he was doing, and that his father had just died – an answer widely perceived as a cop out.

Enemy he is most proud of:
The Coal Lobby Perhaps the biggest long-shot of the Democratic candidates, 69-year-old Jim Webb is a Vietnam veteran – a fact that has defined much of his political career serving as a senator representing the military powerhouse of Virginia.

He was awarded the Navy Cross for his service in Vietnam, and went on to work in the Pentagon before going onto a political career that featured a strong focus on looking after the nation’s veterans.

During the debate he put himself forward as the most qualified commander-in-chief given his military background.

Mr Webb controversially concluded the debate with a joke about killing a man in Vietnam.

Enemy he is most proud of:
The enemy Four wildcards who could become US president